I obtained four AML BETHGON II Coal Porter Hopper cars that had been demonstration show cars. They are in like new condition - still packaged in their original blue boxes.
The cars are 1/29 models of the Bethlehem Steel Car Company aluminum prototype cars. These are my first cars of this type. 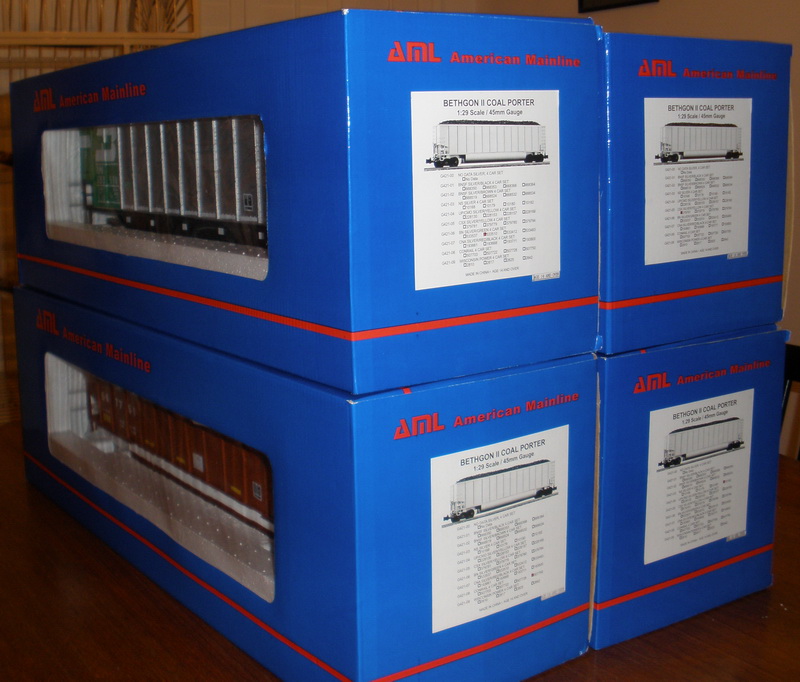 The cars include all metal trucks & wheels and a coal load made of discrete jagged plastic "coal" particles that look realistic. 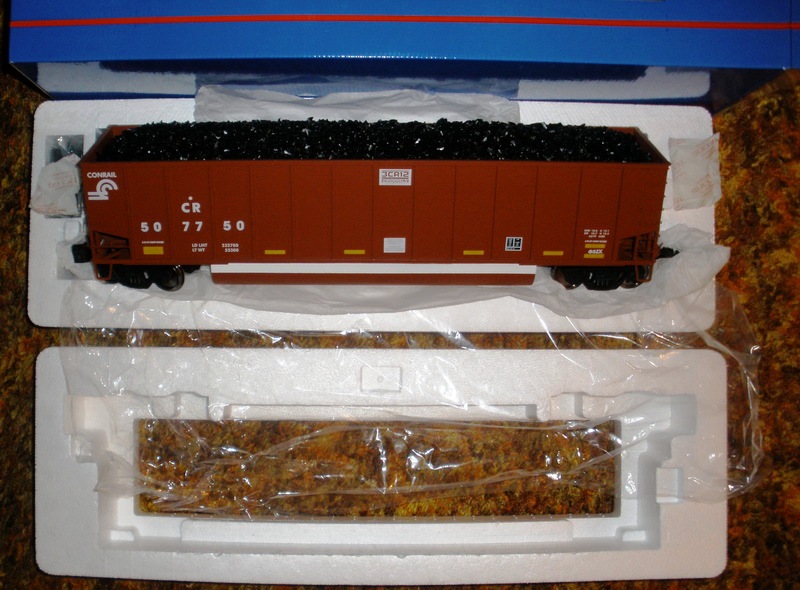 The road names of these particular cars are Burlington Northern, Conrail, CSX and Norfolk Southern. 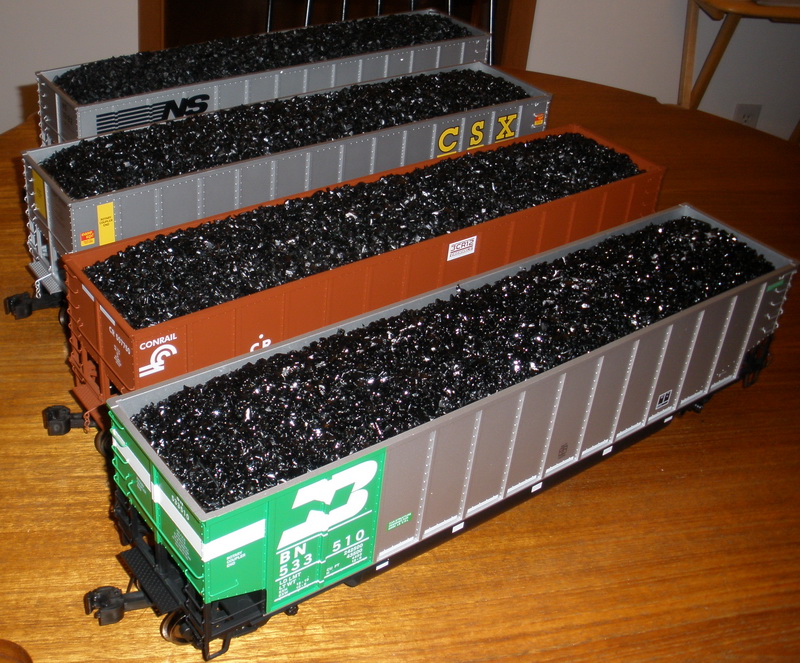 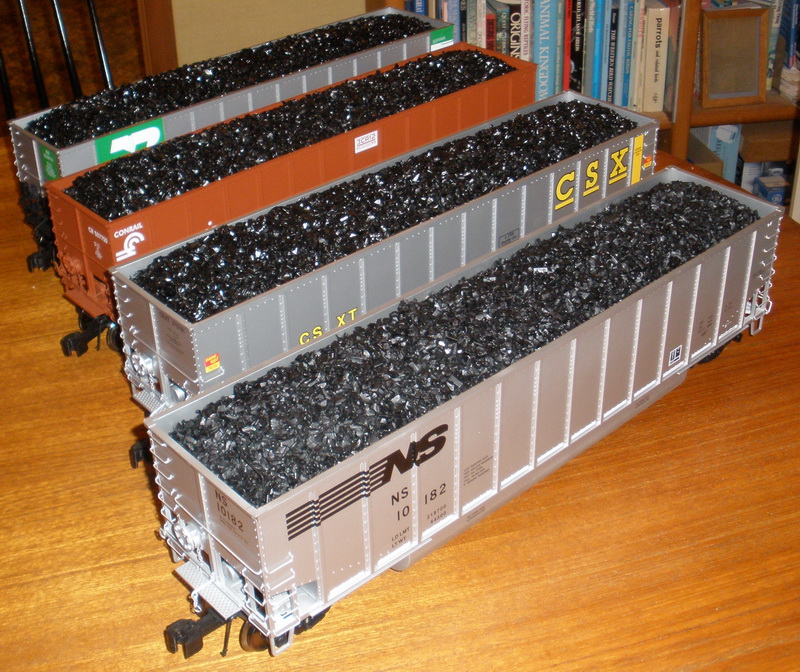 The coal load is removable so the car can be turned upside down and placed on an even surface - desirable when working on the car.

With the coal load removed, a car can be placed flat on its back so the trucks can be removed, and the under frame screws can be snugged down. I found a few screws to be a bit loose.
This is important to check when using body mount couplers since the coupler pad ends of the car must be tucked in around the end sills and leveled as best possible.

Shown below is an end view of the car with the factory truck mount coupler with its metal bracket. 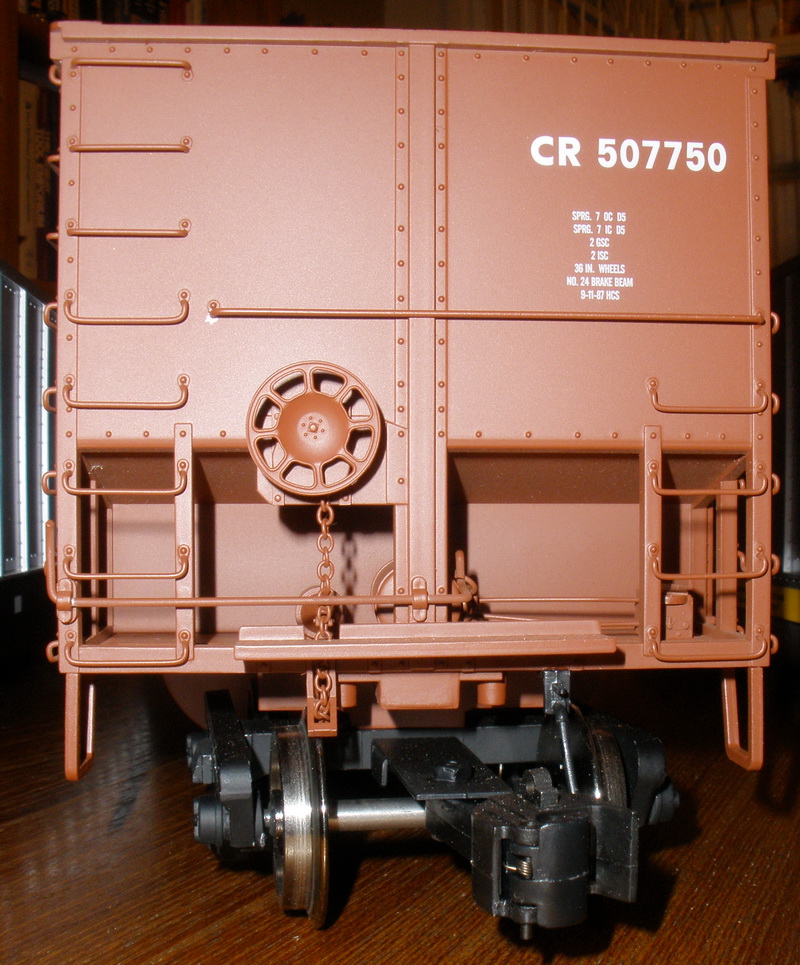 When using body mount couplers, the factory truck mount couplers (including their metal brackets) must be removed from the trucks. 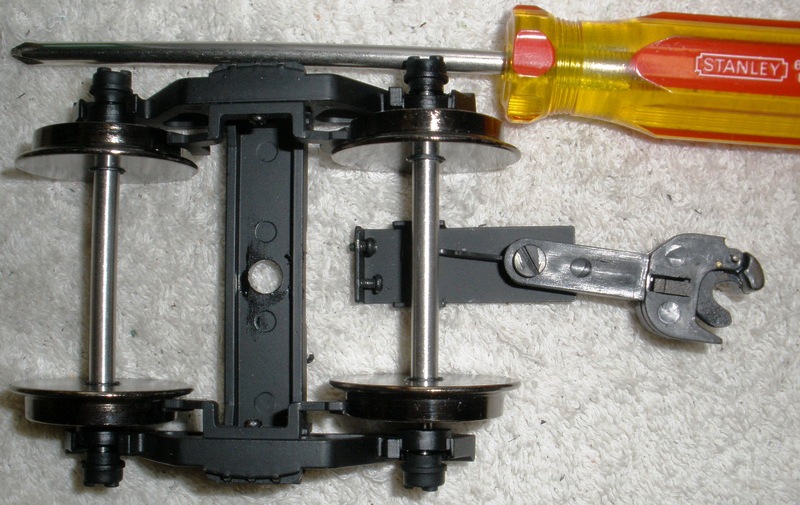 The AML and Kadee 906 coupler boxes look similar, but the AML box is actually thinner in height, and also, has a coupler design unique to AML having an upward offset knuckle,
whereas, the Kadee 906 assembly to be used has a centerset knuckle coupler.

The Kadee 906 coupler box needs a shim placed under its rear mounting hole so that the coupler will have the proper distance to the railhead.
(An alternative is to raise up the car using a spacer washer over the car bolster pivot posts before the trucks are mounted, but doing this will induce some wobble to the car.) 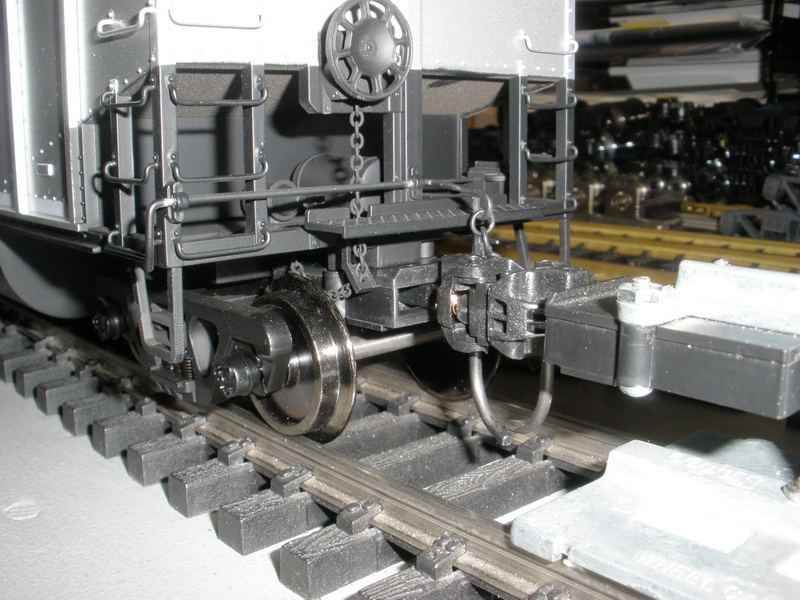 Under some conditions (typically curve track operation) the AML roller bearing type truck will exhibit some drag accompanied by wheel squeaking sounds due to interference with the brake shoes.
There are a number of methods to eliminate this condition - the most desirable is to use spacer washers on the axle tips.
All methods are attempts to mitigate the AML truck's intrinsic design / assembly that lends itself to having a "pigeon toe" side frame stance when looking at the truck head-on.

The trucks have to be disassembled for this method - discussed later.
The method using spacer washers that I prefer is shown and described as follows:

The trucks do not have to be disassembled for this method.
This method is probably the most practical and involves temporarily removing the plastic brake shoes in order to file off some material from their backsides.

The trucks do not have to be disassembled for this method.
This method is simple but not recommended as a permanent fix; however, it can be used as an expedient for car operation on a layout.

The information to follow may be helpful if the AML truck is to be taken apart and put back together.

Put spacer washer on axle tips and lube (as previously described) before reassembling the truck.

Be sure to clean off any excess lube from axle tips before installing the simulated plastic bearing caps.

The pictures to follow are views of the Aristo BNSF 100 ton hopper car on the left and AML BETHGON hopper car on the right.
The coal load and metal wheels are extra cost options on the Aristo car, whereas, the AML car includes these items standard.
The Aristo car's coal load is made of painted foam, whereas, the AML car's coal load is made of discretely bonded individual small jagged plastic pieces better representative of coal.

All this, of course, is reflected in the cars' initial cost for each company's targeted market -
though if one chooses the Aristo options, the cost difference between it and the notably more expensive AML car is little.

The Aristo car is a decently accurate model of a steel type 3 bay dump hopper that is slightly shorter than the AML car.
However, the Aristo car having 3 bays is not strictly correct with a livery representative of aluminum construction (BNSF example at left),
whereas the AML BETHGON car is correct being modeled after an aluminum prototype car (BN example at right).
That said, both are fairly accurate, nice cars when having correct livery with the AML car possessing a bit more physical detail given its discretely made coal load and nice grab irons.

Both cars have been retrofitted with Kadee 906 centerset couplers. Again, the Aristo BNSF car is shown on the left and AML BN car is on the right 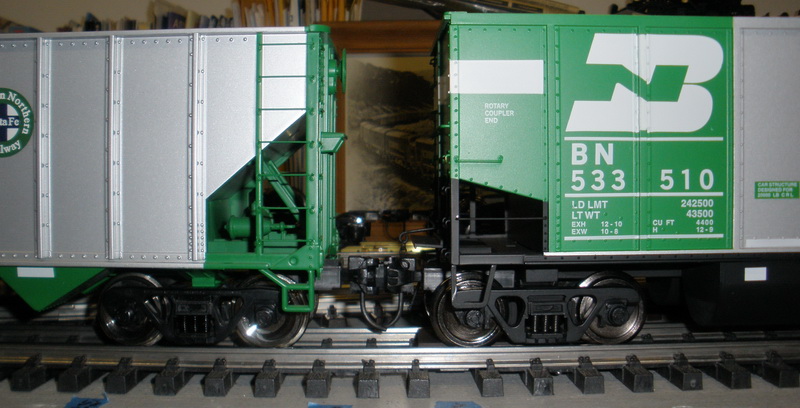 Note that with Kadee 906 coupler boxes installed, the AML car has some slight drag on 8 foot diameter track curves - like the track shown in the below picture. Car operation is OK on 10 foot or greater curves. 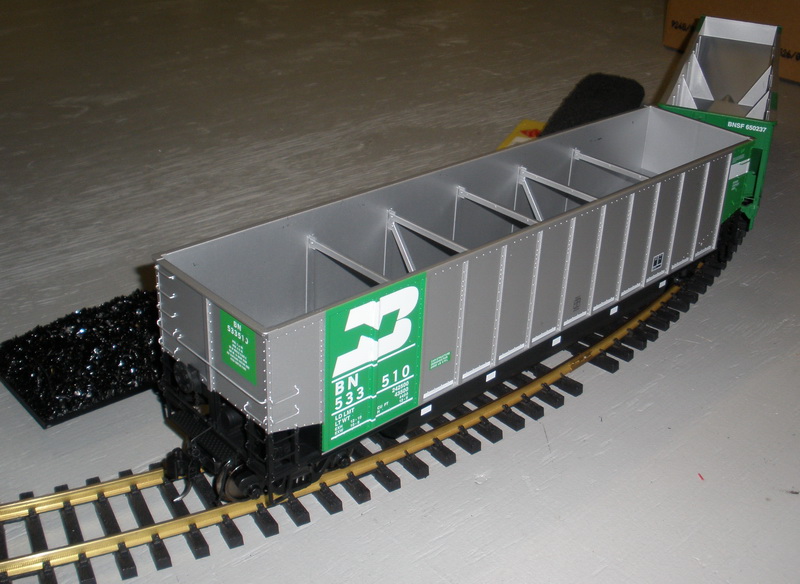 The four BETHGONs having been equipped with Kadee 906s are shown coupled together before being placed in the train. 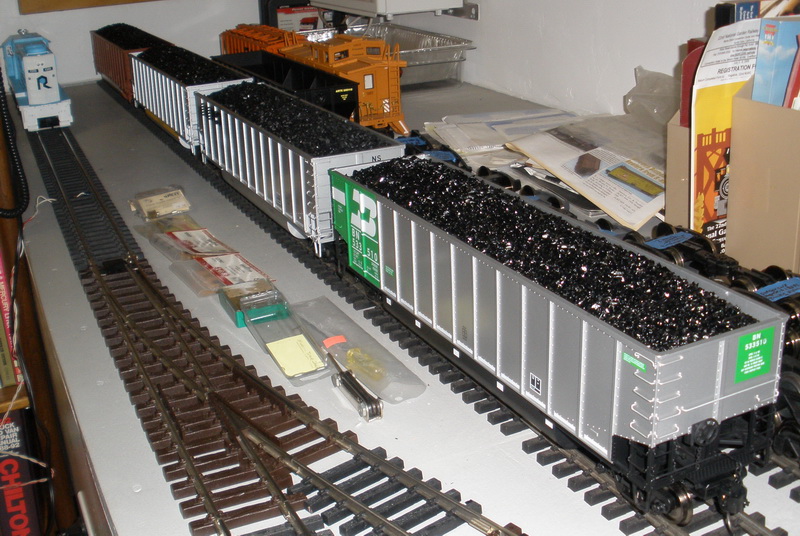 The four BETHGONs were placed at front of a 63 car train on my under house layout.

The most stress imposed on the coupled train car is on the 270 degree, 10 foot diameter loop back shown in these pictures.
Shown below is an overhead view of the trailing loco (Aristo BN GP40) coupled to the first car (BN BETHGON) of the 63 car train. 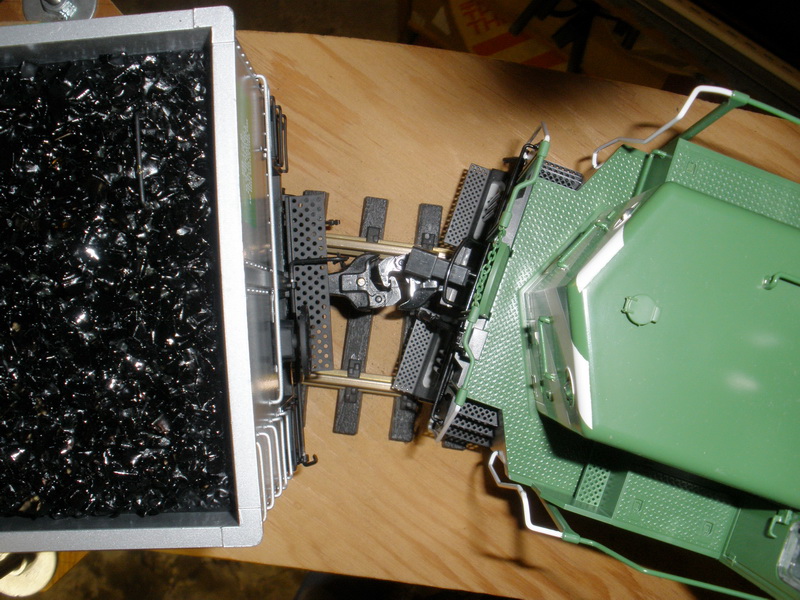 The coupler stress under load is shown below on the inside of the curve. 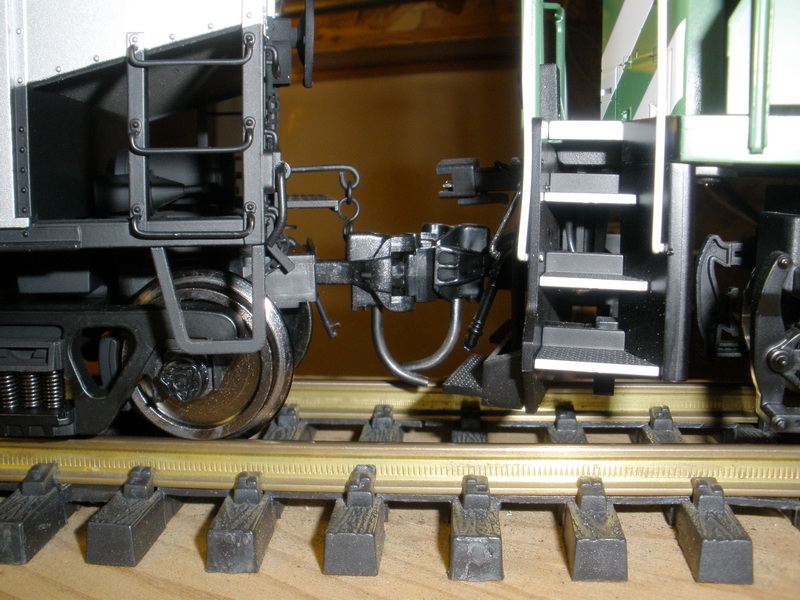 The coupler stress under load is shown in the next couple of pictures on the outside of the curve. 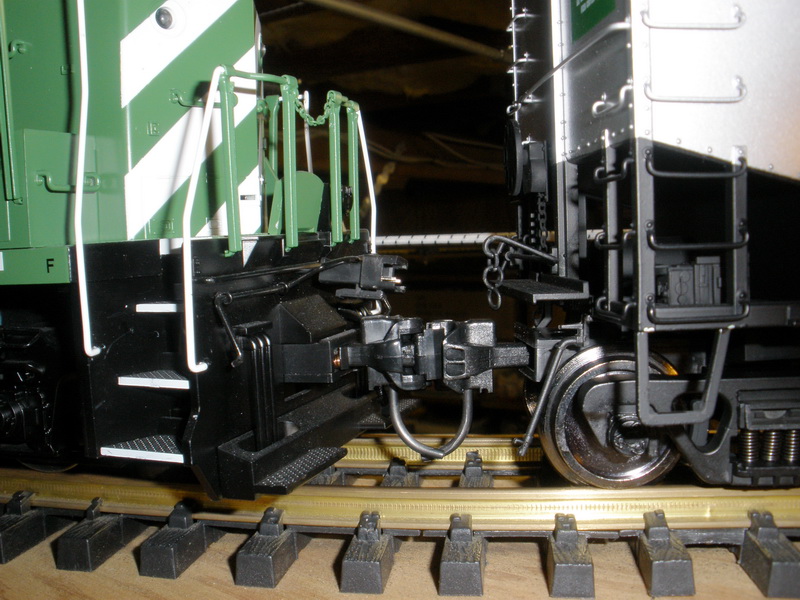 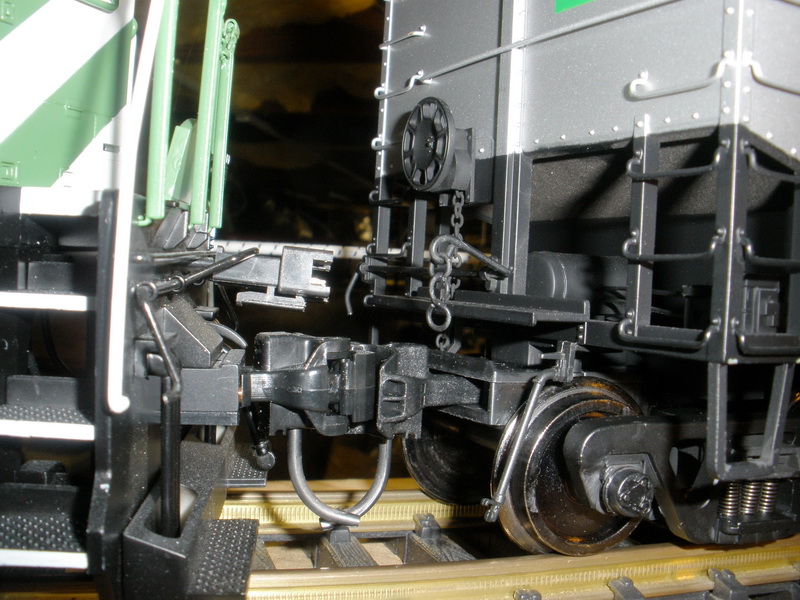 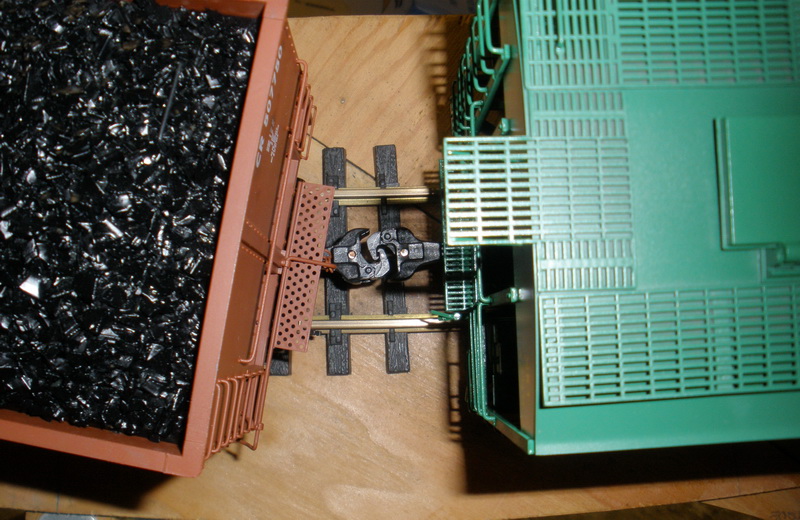 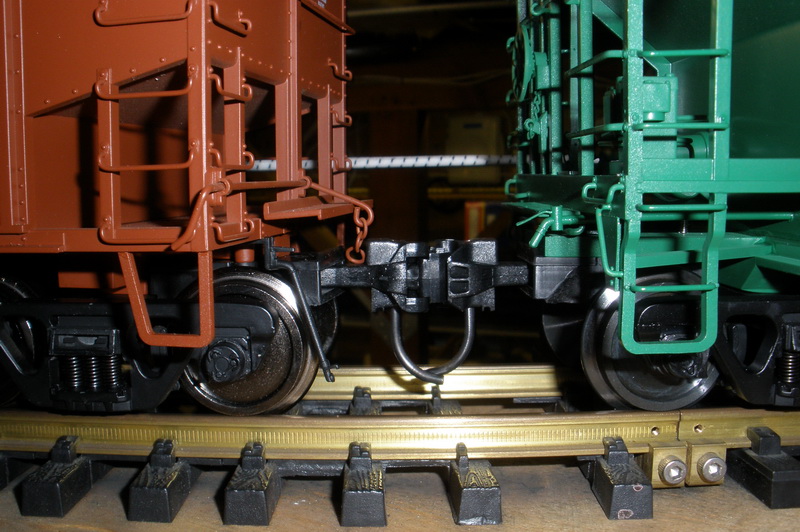