The biggest, glaring issue with the PCC is the grossly out of spec back to back gauge and the out of spec wheel gauge. I have measured several wheelsets that were significantly over 45 mm (the track gauge). The back to back I measured was also way out, like 1.600 as opposed to 1.575. This is caused by an overly thick flange.

Apparently some later run PCC units had better back to back, but of course not good gauge.

Another issue is poor soldering, especially on the slide switches.

A minor issue is the bright blue-white interior lighting. It looks very unrealistic. Happily it is relatively easy to correct.

Problems with wheels / gauge & back to back issues

Every PCC I have seen has at least one axle with excessive wheel wobble, and this can also cause loping speed variations, noise or both:

In the picture below, you see a modified axle, and the wheel treads have been trued lightly. There is some plating and un-machined surfaces on the wheels. This is because I did not want to turn the wheels down a lot. The combination of the casting quality and wobble made it so that not all surfaces were "trued".

There have been a many reports of derailments. After running the PCC on my layout, I could see the problem even before I measured it. The back to back gauge is WAY wide, very unusual for Aristo, since it's almost always tight on their motive power. The flanges are a bit thick and deep too. Both of the ones I have had here derailed on switches other locos have no problem navigating.

The impact of this grossly thick flange combined with the wide back to back forces the gauge of the wheels to be way off (wide), so this wide gauge combined with any tight gauge of track makes the PCC car literally "walk" up out of the rails in places.

So it looked to me that I needed to both thin the flanges and then adjust the back to back. The thinner flanges will make the gauge proper, the fundamental problem.

Having the axles out will also give me an opportunity to true up some of the wobble that most people have seen.

Thin flanges to 0.60, shorten center plastic to 0.8, shorten axle tips until you get the correct back to back.

It may be a bit hard to see but the solder to the switches has air gaps and the solder is not shiny and even. When re-heated and solder added, you get popping and bubbling. I'm not sure if it is extra flux somewhere or poor plating on the legs of the switches, but when you look at the board in person, it looks way worse than the picture above. Even in this picture, the switch at the upper right has air caps and cold solder joints.

Fixing the wheel gauge & wobble & back to back gauge

The basic problem on the wheel wobble appears to be assembly, there is some type of glue visible between the axles and the wheels.

The out of specification back to back and wheel gauge and flange thickness has already been mentioned.

To get these into shape, you need to remove the axles from the plastic gear casting. Be careful not to damage anything. To remove the first axle, just pull them apart, one will come loose. To get the second axle out of the gear casting, you need to carefully lever the axle from the casting. I use a pair of needle nose pliers, and while holding them tight on the axle, gently lever them apart. As soon as you have room between the shoulder on the axle and the gear casting, put the pliers in that gap.

Below is a picture of a stock half axle assembly: 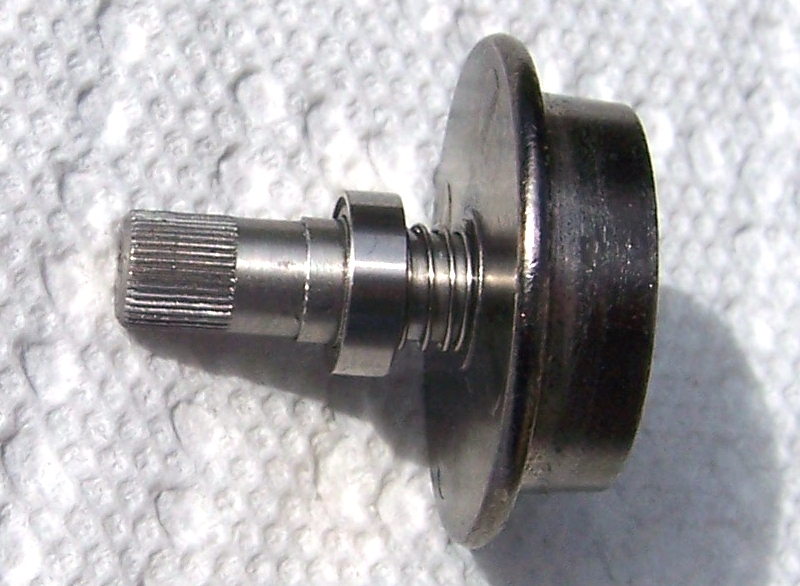 In the picture above you should note several things:

Also, when you both axles out, be sure to find the small plastic disc that was between the axle ends to keep them from shorting together.

Basically, you turn the flanges down from the back, so that they allow you to have both the proper back to back gauge and the proper wheel gauge. This is impossible with overly thick flanges.

Initially I turned flanges down to about 0.072" but on the second PCC I turned them down very close to the G1MRA standard of 0.060, maybe about 0.062-0.064. Due to the excessive wheel wobble, it was impossible to get it closer.

Important note: after turning the flanges down, I needed to take a small amount off each end of the gear casting, about 0.010 per axle off the end. I found this by test fitting the wheels together with a small tube and the plastic spacer. If you grind the ends off even with the small chamfer, and then add another chamfer after grinding, you will do it.

After all of this, I was able to get these wheel set's back to back spot on: 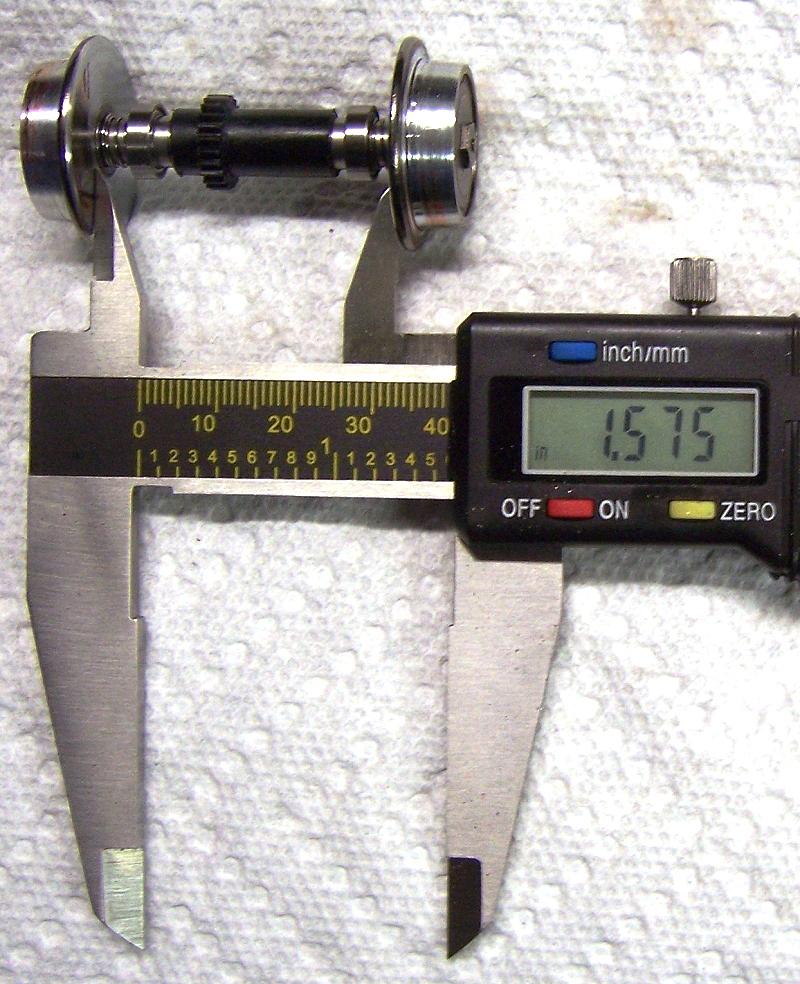 Result: after thinning the flanges and setting the back to back, and truing the treads, the PCC runs like a dream! It used to almost jump out of switches, and wobble side to side in tight curves, now it runs smooth and flat, and there's no visible wheel wobble.

I also worked on the wheelsets for another person, same problem with the gauge, back to back, etc.

In this case some of the plastic axle halves had split.

There are two lighting boards with associated dropping resistors in the body. They are normal 3mm LEDs.

As you can see in the picture below, they are typical point sources, very little dispersion, and too bright and blue white. Why in this day and age someone can't just order "warm white"?  Aristo said that they would evaluate warm white LEDs in their next production run, that they used the same as the RDC. (the RDC has smoked windows and I believe prototypes has fluorescent lighting)

In the picture below, you see my first try at changing the color. The problem is that the lights are so bright, and so undiffused, that the blue white light still shines through!

Here's my second attempt, I took the above film and spray painted it with orange paint. I cut the plastic about 3-1/8" wide and it tuck just under the plastic windows, where there's a small ledge. Notice I had to notch it around the doors. Notch it just enough to clear since there are lamps near the doors.

The picture below shows more dispersion of light and the laser blue white is controlled.

And here's how it came out:

Below is a fuzzy Youtube video, sorry, it was late out and dark (darker than it shows)