The early era prototype Piggyback flat cars appeared to have been modified or evolved from predecessor general use 50 foot cars, and then in subsequent years these cars may have been re-purposed back to general use flat cars as more load / unload friendly designed cars came out. 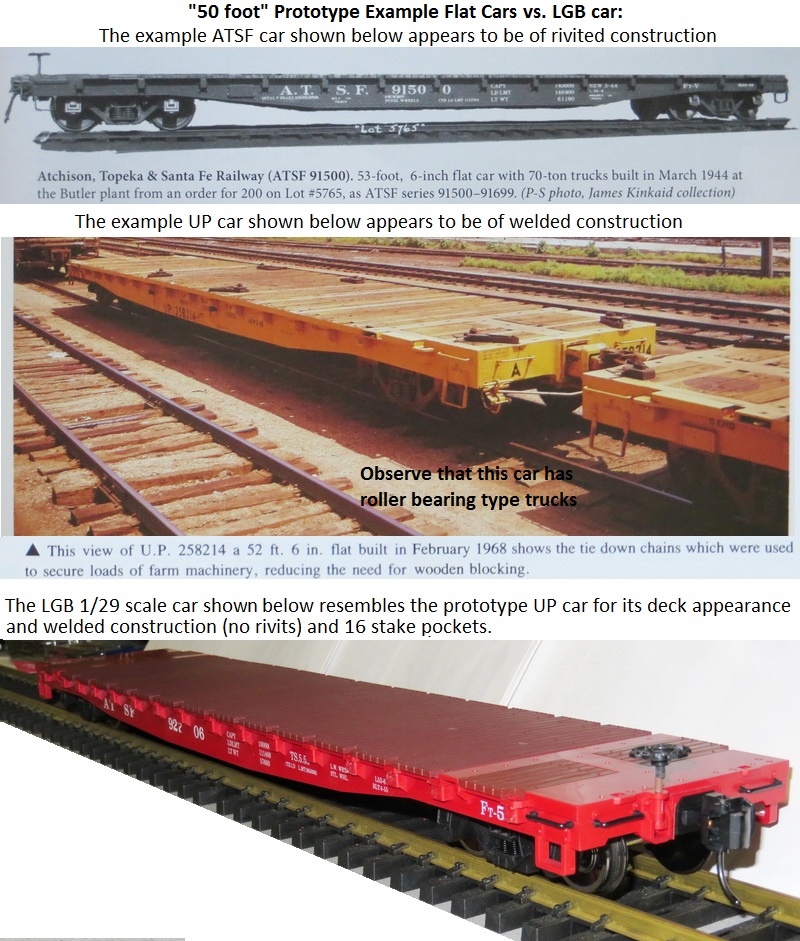 Note the LGB car that is shown above I had lowered and body mounted Kadee 907 centerset couplers.

The LGB cars are packaged in pairs of two cars in the same road name but of different livery.  Offerings include New York Central, Pennsylvania and ATSF and possible others.  The ATSF pair is P/N 40540, comprising one car colored red and the other "box car red" (brown).  A Piggyback trailer is not included; however, brake wheels, side sill bumpers and ramps are provided. 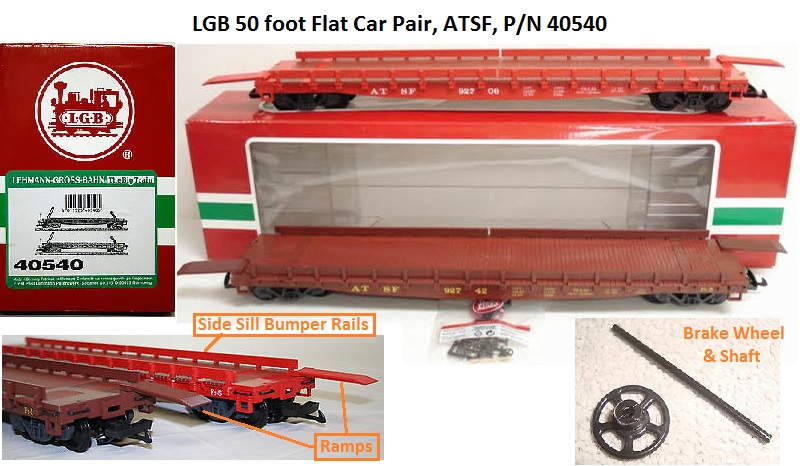 These LGB 50 foot flat cars are currently out of production.

Though it's possible the Cars may be obtainable as NOS (New Old Stock) or used on eBay and elsewhere, I obtained a lone used ATSF red colored car for $25.00 at the Santa Clara, California 32nd National Garden Railway Convention during the July 9, 2016, general public opening.

The used ATSF car I obtained had missing ramps & brake wheel, and the side sill bumpers were crudely hot glued in place with a couple of them cut short.  Also, there were several holes drilled in the main deck surface.  I lowered the car and body mounted Kadee 907 centerset couplers - summarized in the  illustration below.

I filled-in the deck holes using an Automotive epoxy paste followed by some light sanding and paint. 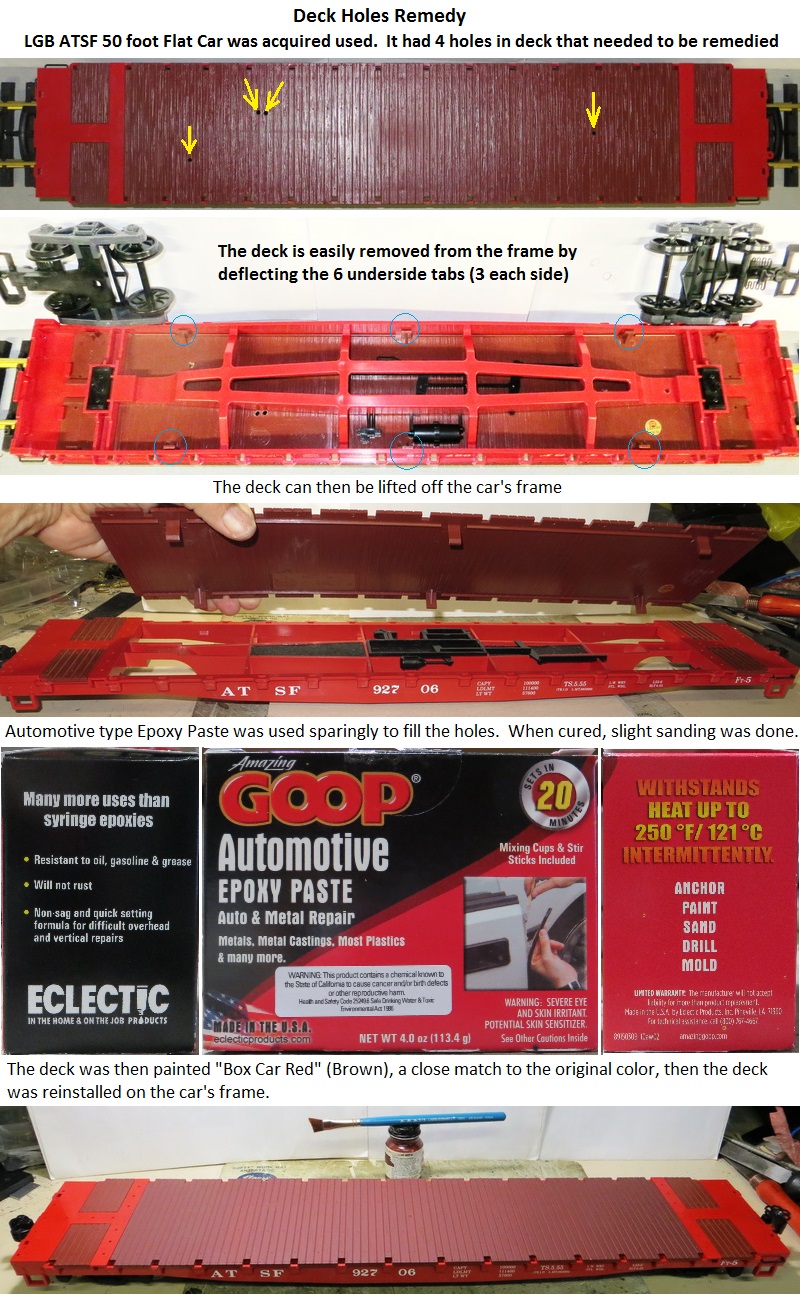 Body mounting  Kadee 907s in the area of the existing end sill pocket is done in concert with establishing an optimal car height from the railhead. Lowering the car is most easily done by replacing the LGB factory trucks with Aristo-Craft Bettendorf or Barber Roller Bearing trucks since their truck bolsters are inherently lower than the LGB trucks.
Note: It's possible to modify the LGB trucks to lower the car; however, there is time & work spent on these trucks to do so.  This is described later in the section on "Other Truck Options".

For the ATSF flat car, I elected to use the Aristo Bettendorf truck; however, the Barber Roller Bearing truck will lower the car the same amount which is almost 0.2 inch. 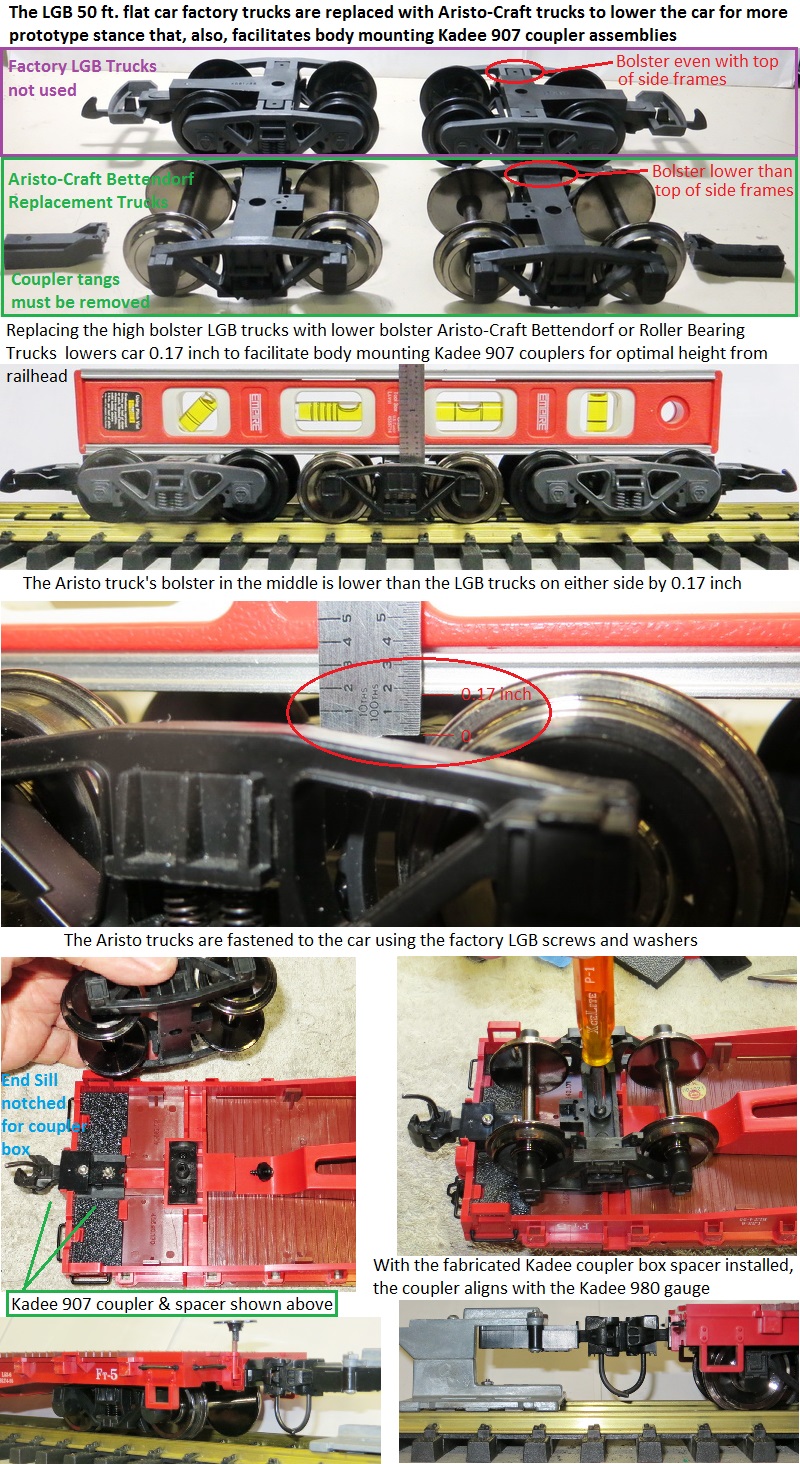 It can be seen that lowering the car by 0.17 inch not only presents a prototypical appearance but , also, provides an optimal height for the Kadee 907 coupler to align with the Kadee 980 gauge. To accommodate the Kadee 907 coupler box, the car's end sill where the slot is located must be cut out to the dimensions shown in the following illustration. 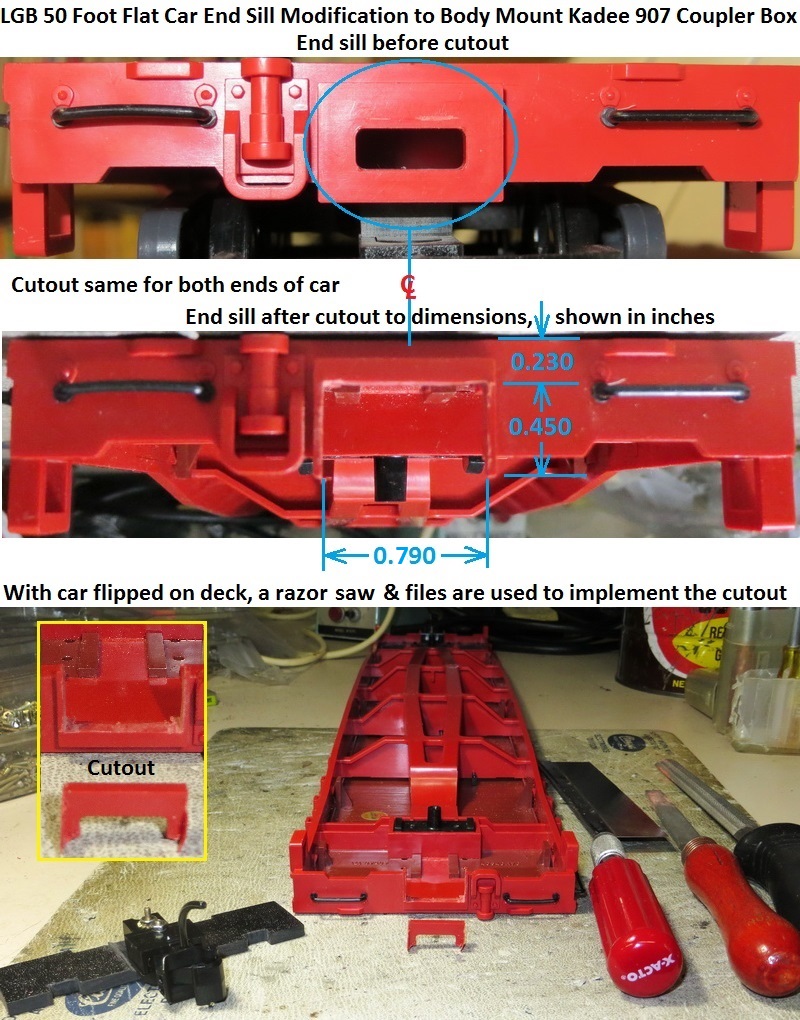 If it's not objectionable, one or two holes can be drilled in the deck near the end sill to mount the Kadee box over the cutout on a simple spacer having a thickness of 0.135 inch.

However, to mount the Kadee 907 without having to drill holes in the deck can be done by using a fabricated spacer that will be glued within the underside of the car body at the end sill.  I elected to do this method.

The spacer is the same for both ends of the car; hence, 2 spacers are required.

The material of the spacer is ABS plastic obtained from TAP Plastics.

It happened to be textured on one side.  The smooth side is to be used for gluing to the underside of the car body.
The dimensions of the fabricated spacer are shown in the illustration below. 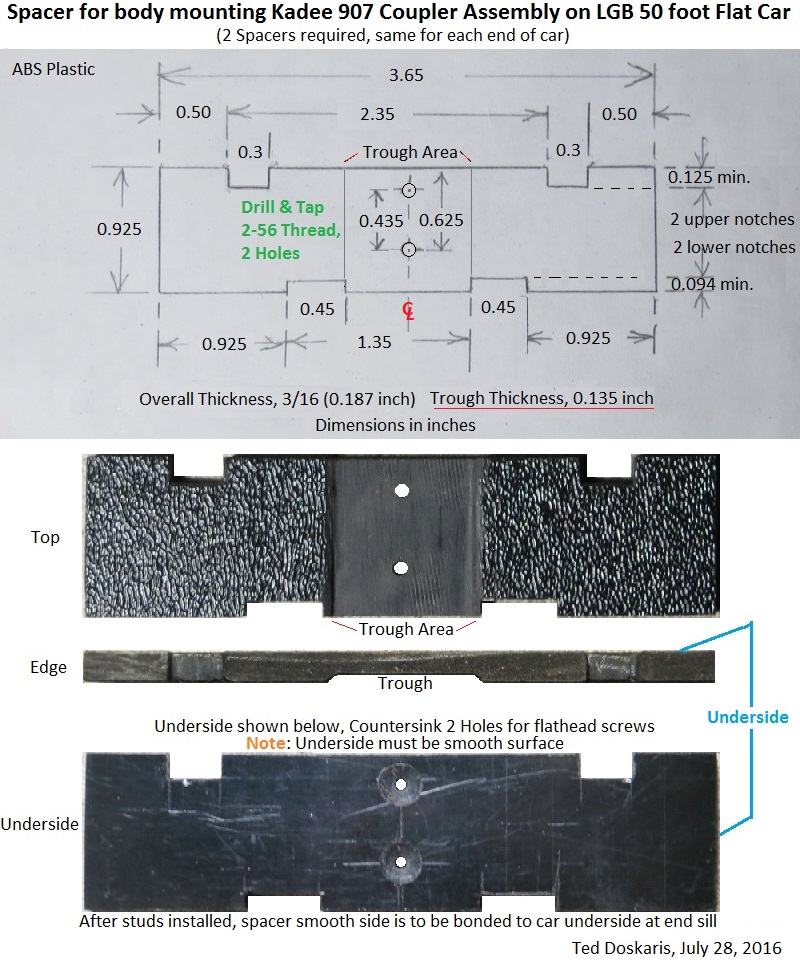 Note:  Though preferable to have a thick spacer for its rigidity and larger edge surface to butt against the end sill, a simpler spacer could be made with an overall thickness of 0.135 inch (same as the trough) but otherwise having the same dimensions as illustrated above.

The Kadee 907 coupler box is mounted to the spacer as illustrated below. 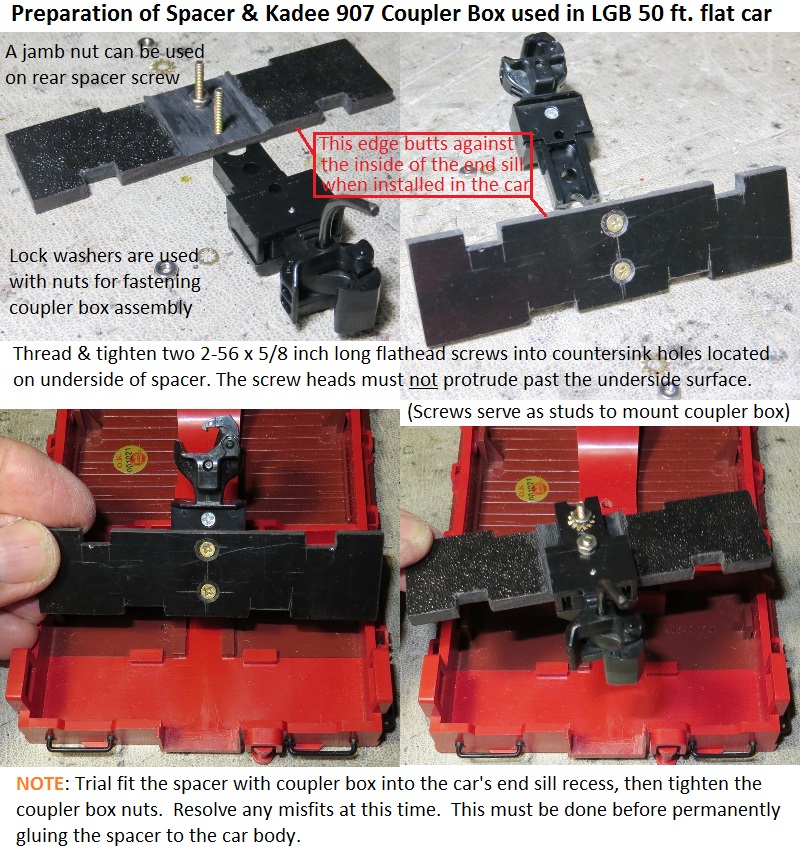 A spacer is used at both ends of the car and is installed the same way.

The spacer is best bonded (glued) to the car body underside in the end sill area using a solvent type cement as illustrated below.  Unobstructed trial fitment of the spacer with fastened coupler box should be established before applying the cement.  (In this regard, the spacer can be nestled down into the car and then the coupler box installed over end sill cutout & spacer studs and nuts tightened in situ.) 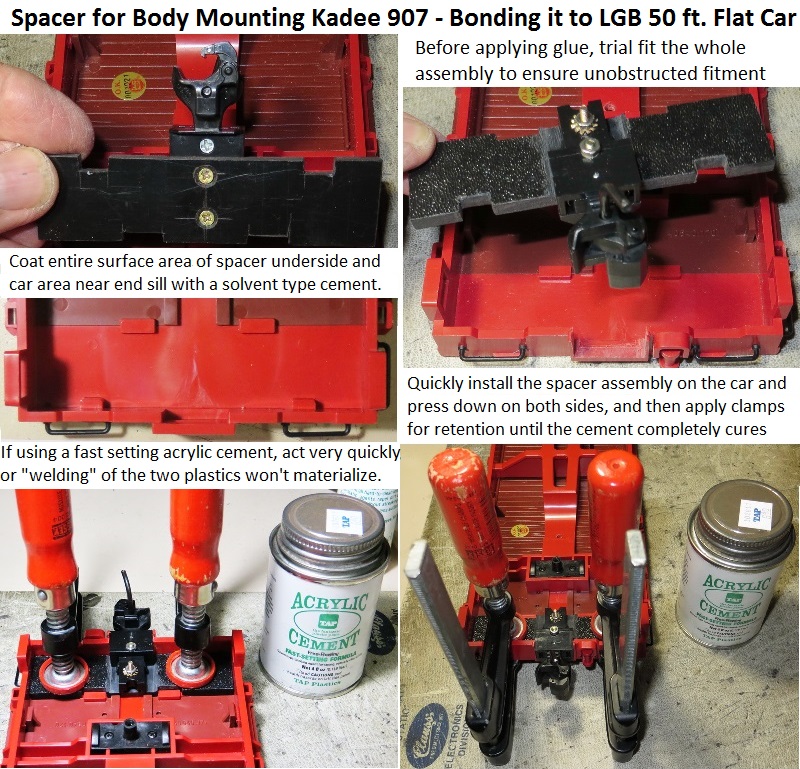 The more readily available Kadee "G" scale ASF friction bearing or Barber Roller bearing type trucks are another possibility, but these can't be commented about until tried; however, they will likely work to lower the car when not using Kadee's recommended adapter plate from the kit that's provided with the truck.

The LGB truck will take time and a degree of skill to modify it so that the car can be lowered, therefore, substituting other brand trucks will be easier to contend with.

The Aristo Barber trucks will lower the car like the Aristo Bettendorf trucks. 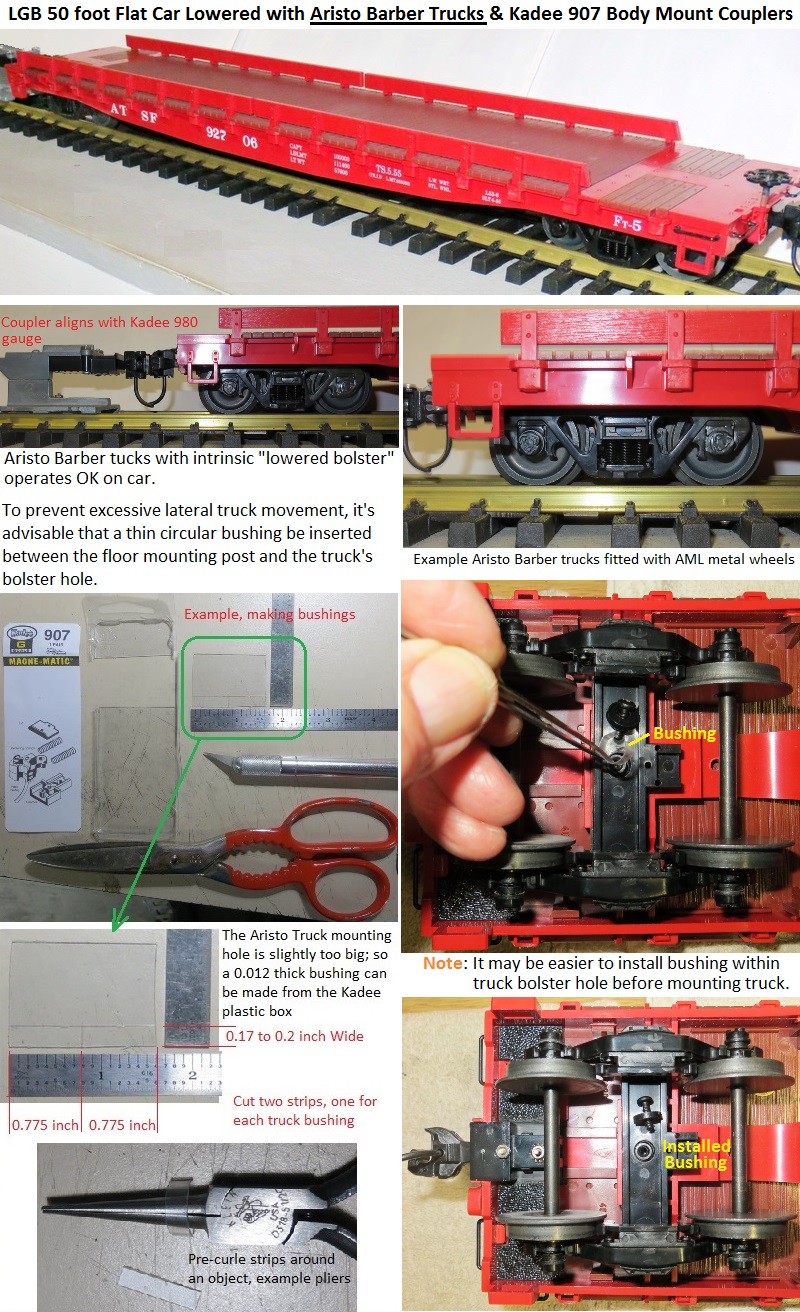 Note:  The example Aristo Barber truck illustrated above includes AML brand metal wheels, P/N G12-101.  The Aristo ART/CRE 29111 type wheels are typically used and preferred for their added weight; however, these AML wheels are aesthetically desirable due to their all black finish.  Compared to the Aristo wheels, the AML wheels are slightly smaller in diameter for both tread and axle tips, which when installed, will contribute to lowering the car by a minimal amount.  It's important that new out of the bag AML wheels should have their axle tips cleaned smooth and lubricated before installing them in a truck. (The tips appear to have a rough feel to them, maybe due to the factory finish process applied to the entire wheel-axle assembly.)  When first operating a car with these type AML sintered steel wheels, there is a degree of roughness that diminishes with use over time. 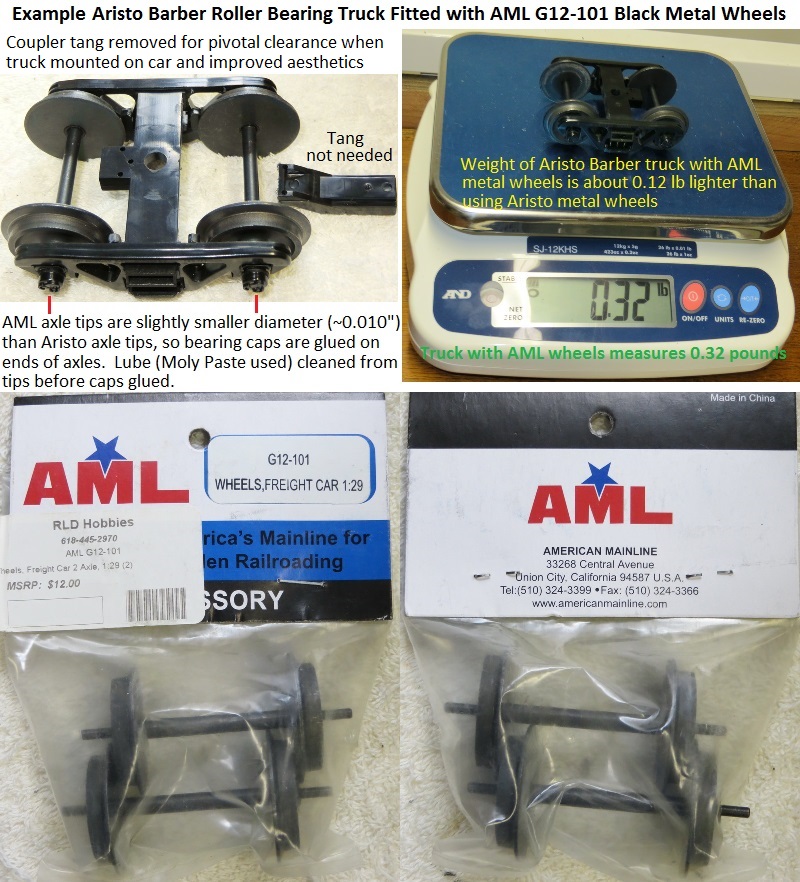 LGB trucks when modified will lower the LGB flat car like the Aristo trucks.
To modify the LGB trucks, see Appendix A in the Vignette for the LGB  40 foot Box Car. 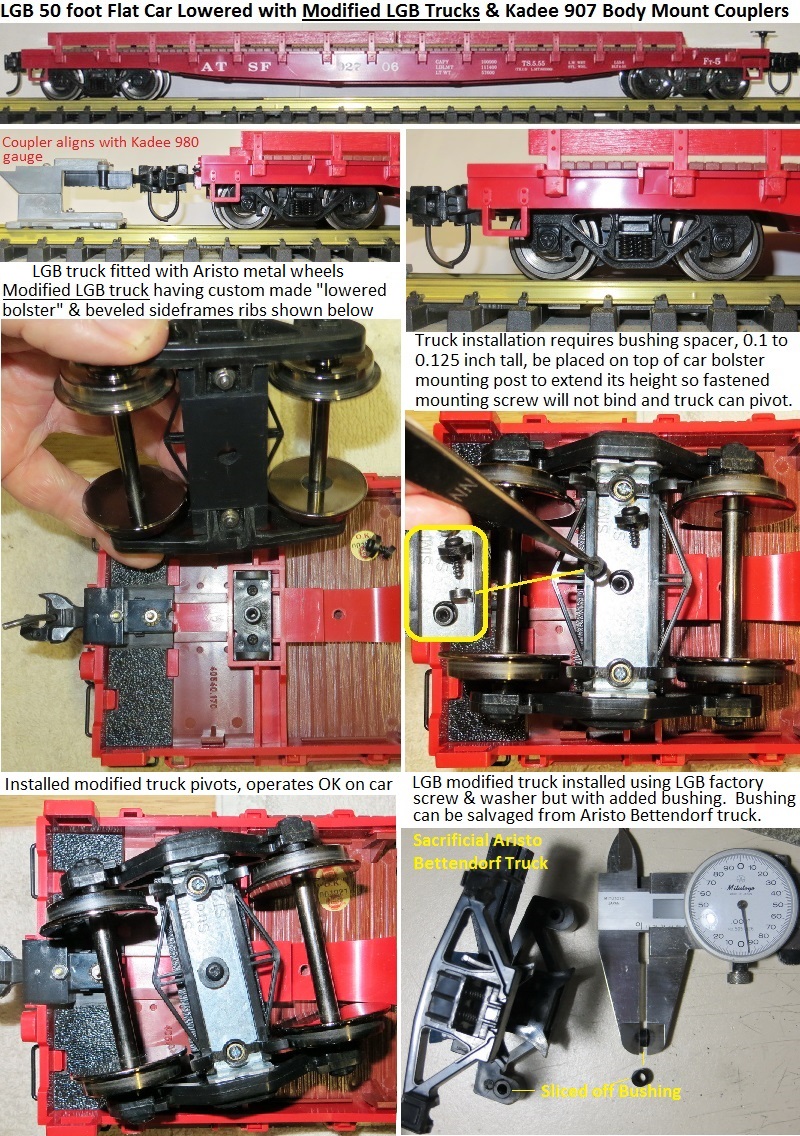 The LGB flat car as factory equipped is a "featherweight" and must be weighted more when operated in a long or heavy train around curves.  Adding weight in the under frame is best for a low center of gravity as illustrated below.  No. 9 Lead Shot obtained from a Gun store is used in this example.

The 1/29 scale LGB "50 foot car" is actually a bit longer when measured and scaled up to prototype.  Hence, the term "50 foot car" should be considered as a generalized catchall.   In deed, prototype cars may be identified as 53 foot, 53 foot 6 inch, 54 foot, etc. 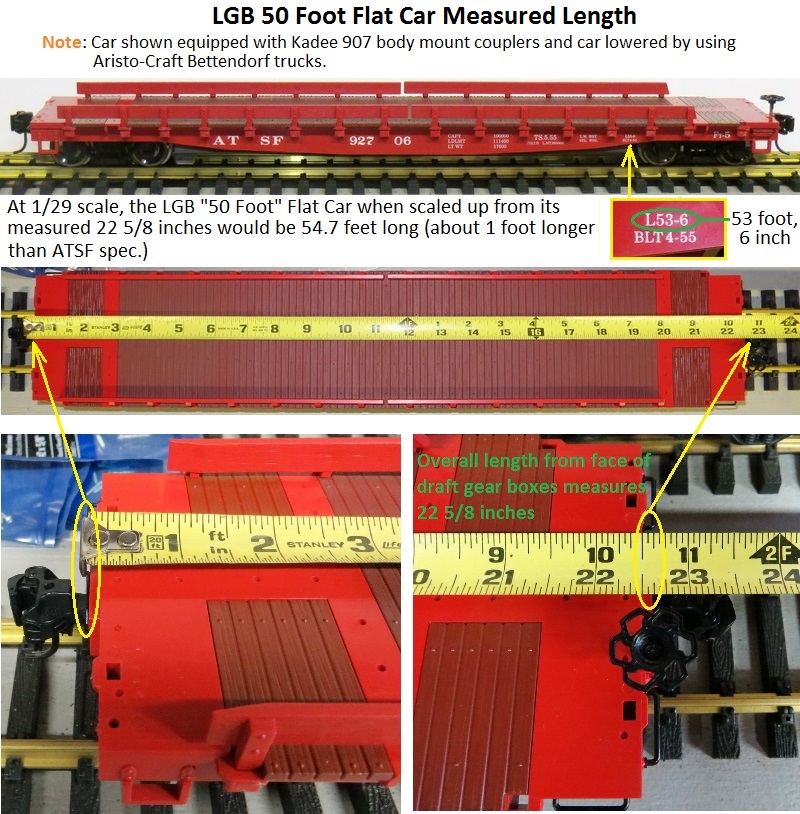 Aristo-Craft had made a 40 foot flat car.  It was lowered and fitted with Kadee 907 centerset couplers using a different method compared to the LGB 50 foot car.

Illustrated below are the Aristo and LGB flat cars, both modified, shown coupled together. 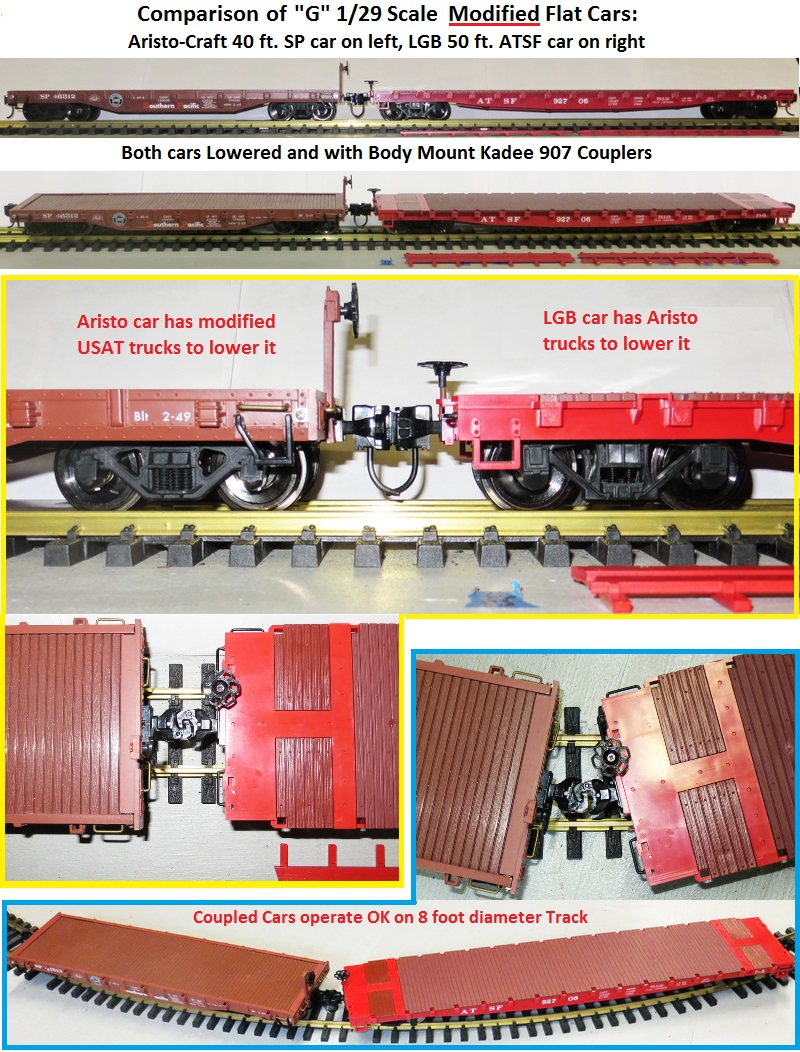 As shown above, the modified LGB car operates OK down to 8 foot diameter track.