Space for your layout - how much do I need?

First and most important advice: "grab" all the space you can.

The absolute most common mistake is having your curves too tight: 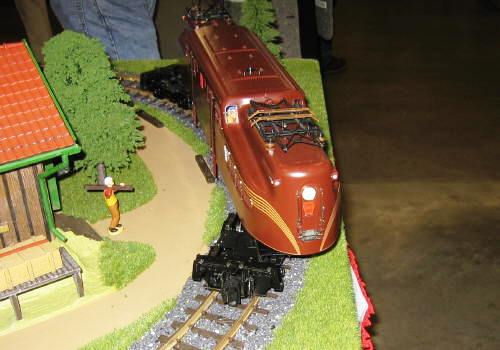 Even though you can find track that makes a complete circle in 5 or 4 feet (diameter), unless you want a "toy-like" layout with severe restrictions on what you can run, you need bigger curves.

Just plain do not do the 4' diameter curves unless someone is holding a weapon to your head.

The next most common mistake is grades too steep. Mainlines rarely had over 1% and usually never over 2%. Logging railroads with geared locos maybe 5-7% or so.

You need to measure to see what you think is not so steep. Try to keep your mainlines to 2% or maybe 3%

Also remember percent is NOT the same as degrees. 3% is just 1.7 degrees. Be careful of what you are measuring!

You need to realize how "far" we are from the prototype in curves "sharpness" to see why sharp curves make unreliable operation.

In the real world, curves are measured in degrees. Bob Hyman on MLS wrote:

A 1° curve has a radius of 5729.65 feet. Curves of 1° or 2° are found on high-speed lines. A 6° curve, about the sharpest that would be generally found on a main line, has a radius of 955.37 feet. On early American railroads, some curves were as sharp as 400 ft radius, or 14.4°. Street railways have even sharper curves. The sharpest curve that can be negotiated by normal diesel locomotives is not less than 250 feet radius, or 23°.  Even narrow gauge lines like the Rio Grande Southern had maximum curvatures of 24°, and there were only two curves that sharp … one at the Ophir Loop and the other at Trout Lake.

A much simpler approximation is to divide the degree of curvature into 5729.65.  The resulting number is the prototype radius in feet.  Then divide that number by your scale and you have the model radius.

Let's assume 1:29 scale. Even a 6° curve comes out to 32 foot radius. To us in the hobby, that is HUGE, and that represents a very broad curve. Conversely, a 5 foot radius is almost 40 degrees, which would never be found in the prototype, but is considered somewhat broad in our hobby.

So, you need to broaden your curves all you can, and it will pay off in appearance, operation, reliability, and just plain enjoyment.