QS Industries built a new ASIC and based their Titan series on it. QS Industries makes a Titan-U for HO, and a Titan-DO for 2 rail O scale. Tony Parisi, of Tony's Trains came up with the idea for a G scale decoder called the Quantum Revolution to fit the Aristo socket, and later updated it to have the "Titan" chip.

In June 2012, QSI Solutions was in production of the G scale "Titan", the successor to the popular QSI Quantum Revolution (Yes Aristo used the same name too).

As of 2019, QS Industries sells the HO and O decoders, but the manufacturing and sale of the G scale Titan stopped as QSI Solutions (Started by Tony, and later purchased by Josh) ceased activities.

The picture below shows the top of the Titan decoder, with tons of screw terminals, no more itty bitty plugs and sockets.

The picture below shows the side view. The power transistors are on the second board, and you can see the Aristo socket pins (that also fit some of the Bachmann stuff)

The picture below shows the bottom board, which has the power transistors: A few decoders ready for installation When the original G scale QSI hit the market, it sold like hotcakes. It had a lot of features, great sound and low price.

Well, the Titan was likewise another "Quantum" improvement, although not everyone "gets it".

All the QSI's have extremely full featured sound and sounds that change according to the ACTUAL load on the locomotive. In addition the QSI reads the ACTUAL motor RPM so you can get your chuff rate synchronized with the actual driver rotation.

All in all a ton of improvements. The price has gone up from $180 to $200, but considering the second board, more components and way more features, still a great deal.

At first, I thought this was a gimmick, that other than running 2 speakers for locos with 2 prime movers, it was just "marketing". Well, that was until I heard what you could do with it, and how different a loco with 2 speakers sounds.

Many people will likewise pooh pooh this until they hear it. For the open minded: the 2 speakers just makes any sound more realistic by giving you the ability to "place" the sound. Remember the first time you heard a REALLY good home stereo?

There are currently 3 versions:

1. The "standard" Aristo unit, with pins for the socket.

2. The "magnum" version with no pins, for a completely hardwired install

3. The "Bachmann" version to accommodate the modified socket that Bachmann has seen fit to create.

The 10 amp "version" comes with a fan, but the hardware is the same.

There are 4 FETs that have D1-D4 silkscreened, they are S1045 10 amp Schottky diodes, used to rectify the DCC track power.

The diagram below is a nice reference of what connects to what. The default mapping of lighting ports matches the LED number. 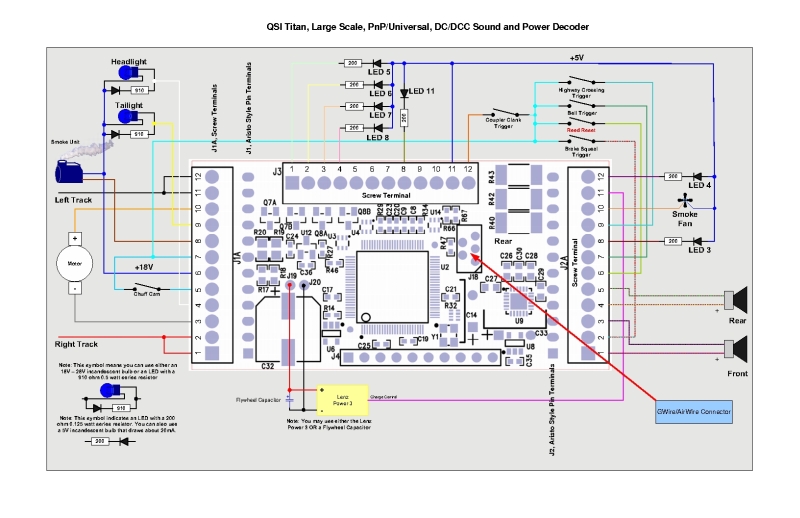 Nice to have 2 terminals for track pickup wires, since you often have 2 trucks, or a loco and a tender, the terminal screws are small, but the slotted heads are an improvement

when reading back CVs with high and low bytes, you need to use the low byte to read back with the cv64 thing

If you have the status readback set up so that the Titan does a verbal acknowledgement of  CV programming, if you program something that cannot be set, then it will either not announce at all, or if it's an "illegal" index, then you won't get the part of the announcement

I noticed that it only takes one press of F6 to wake up the loco after placing on the track, not 2 of them as in previous QSIs. Conversely, after a shutdown with F9, it might take 3 F6's to start up.

The 2 F9's used to work, but were taken out of the firmware in August because people kept putting their units in "disconnect".. too bad... I want that feature back.

The automatic steam noise of having the cutoff valve open at start does not last as long as the old QSI which was pretty obnoxious.

To make things more difficult, you have to enter the MPH ratio and Scale Wheel diameter values in 2 separate CV's.

Basically you split the number into 2 pieces, and enter the 2 pieces into the 2 CV's

A value is split into a "low" byte and a "high" byte. (byte is a computer term for a number that goes to a maximum of 256)

To create these 2 "bytes" you take your original number and do the following calculation:

The scale wheel diameter is 5510 (hundredths of an inch)

The low byte is what is left over after taking the "high byte" out of the original number.

Take the original number minus the "high byte" and you get the low byte:

Note: the larger the number, the more chuffs per revolution

"Normal" smoke on off control:

If you connect a "normal" smoke unit that runs from track voltage, you connect it to J1 pins 8 and 10. If your smoke unit is polarity sensitive (most are not) the plus pin is pin 6.

By default, this output is in a lighting group controlled by DCC function 12.

I call it this because the decoder is driving the smoke and fan directly, like MTH has always done, and Zimo does.

You need a current model USAT smoke unit, or a MTH unit, or a modified Aristo unit.

You drive the heater and fan directly from the decoder.

At this time, there are no "dedicated" smoke unit CV's or feature codes.

F12 turns smoke on and off as above.

In BEMF control, there are 3 parameters, P, I, and D that control the BEMF behavior, and there are 4 speed ranges that you can set different parameters. This is pretty tweaky stuff, normally you don't have to touch these, especially with the new Titan. QSI made a big change in how they measure BEMF over the previous QSI models.

The CV's to set thes 3 values in all 4 speed ranges are below:

There's a procedure that QSI uses to really characterize a loco motor. Loco Lee and Fred Severson (the "S" in QSI)  did some extensive testing on Aristo E8's, here's what they got (in the same order as the table above

I tried these out and they worked great. Most people can just leave the stock settings alone, but this adds a little more low speed control and smoothness.

Remember to turn BEMF on, most default files come with the STC enabled, not the RTC, which is what you need to apply BEMF to the running.

Lighting port control: (not completed yet, still notes to mysef here, so take everything as preliminary data)

Diesel: Need to double check steam but this perfectly matches the Titan U configuration for diesel so I assume it will be the same for steam.

The LED number on the drawings matches the port number in the documentation.

Port 11: Not assigned by default (need to modify for smoke use)

Verified same as Titan U.

Port 11: Not assigned by default

Port 12: Not assigned by default.

As I had mentioned all the lights are grouped into multiple light sets.

There are 3 assignable lighting groups.

Multiple Lights 1 is controlled by F0 and contains:

Multiple Lights 2 is not assigned to a function by default (was F11 on Q1a before support for alternate horn was added) and contains:

Multiple Lights 3 is not assigned to a function by default (was F12 in previous versions until support for smoke was added) and contains:

If you'd like to assign these to functions we have F16-25 with nothing assigned to them currently. We can certainly start using these functions if you like.

There is no discrete function to turn on or off the fire. We're operating under the real world idea that if the loco is fired up, the firebox is glowing. You can change the programming to give it a button to turn it on and off, but again, seems a little unrealistic.