Shown above is the Aristo Napa Valley Wine Train with locos lowered and both locos & cars fitted with Kadee 907 body mount couplers.

Some time ago I got Aristo's beautiful "G" 1/29 scale Napa Valley Wine Train.
However, disappointing to me, the cars included those 2 axle trucks so unbefitting to a true heavyweight car, particularly noteworthy as the prototype Wine Train cars have 3 axle trucks. Unbefitting, both 2 axle and 3 axle truck types have grotesquely long coupler tangs that make the cars in a train look toy like.

My Wine Train originally consisted of 5 cars and 2 newer version ALCO FA1 locos having the ball bearing motor blocks - though not of the last version with factory lowered body shell and new smoke unit.

Subsequently, I lowered the locos - albeit not like the factory had done, added extra weight to them, got two more cars (a diner & "Deli" coach), and installed body mounted Kadee 907 centerset couplers on the locos and cars.
These changes had a dramatic affect on both appearance and performance on the layout.

On my under house layout portion, the main line consists of 10 foot minimum diameter track with many curves and some loops and "S" bends with access to the rail yard having 8 foot diameter curves. The outdoor layout portion includes loops with more sweeping curves and grades.

Upgrades include changing from truck mount couplers to body mount Kadees centerset couplers. Doing this brings the locos and cars much closer together whilst targeting operation down to 8 foot diameter curve track. For locos, extra weight was also added. For cars having 2 axle trucks, they were changed to 3 axle trucks.

The Illustrations that follow show how the lowered ALCO FA1 locos compare to the factory height locos.

First, is the back to back appearance with lowered loco on the left and as received factory height loco on the right:

Shown below are the as received factory pair locos on the top and then the pair of lowered locos on the bottom. 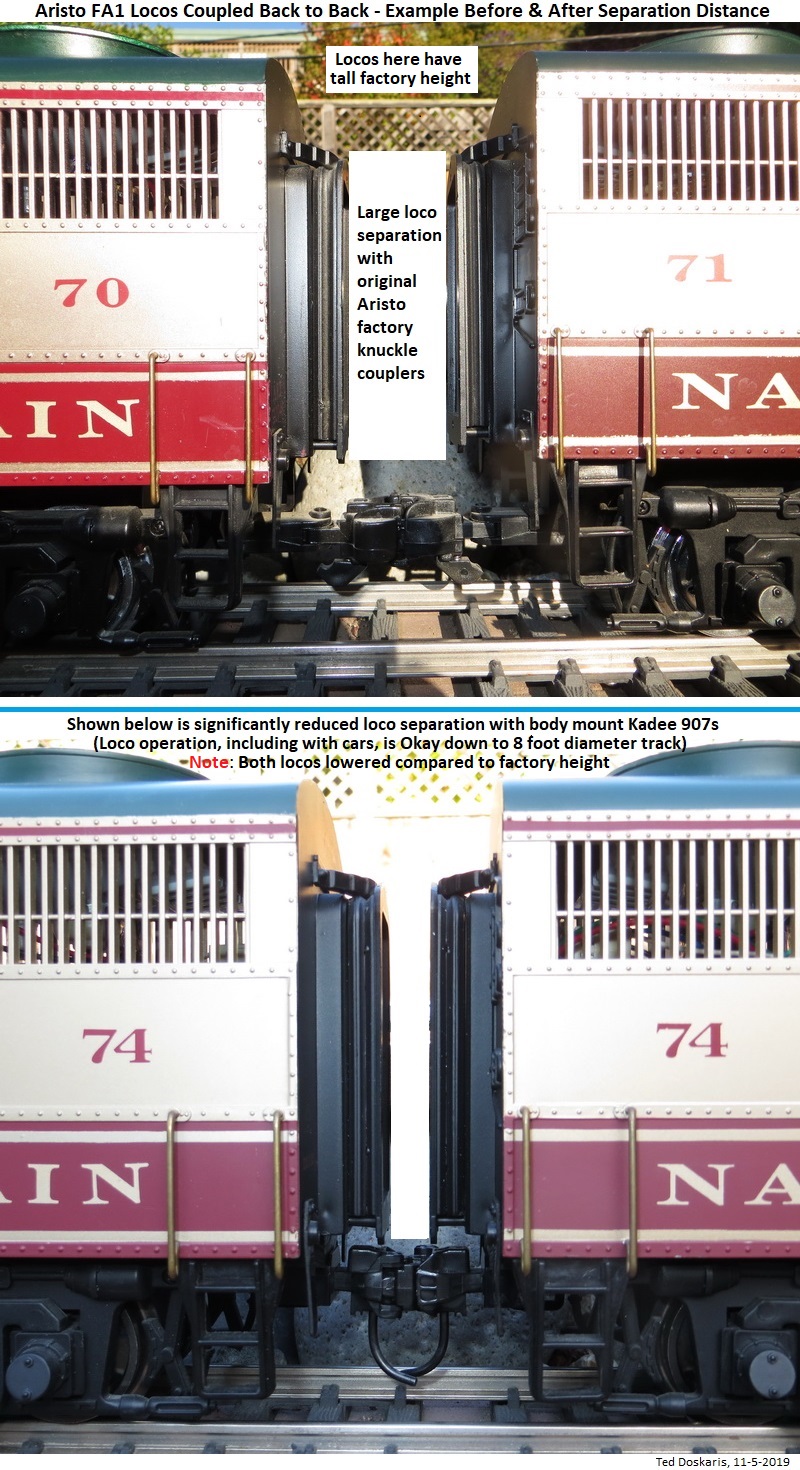 Shown below are the as received factory pair locos on the top and then the pair of lowered locos on the bottom. 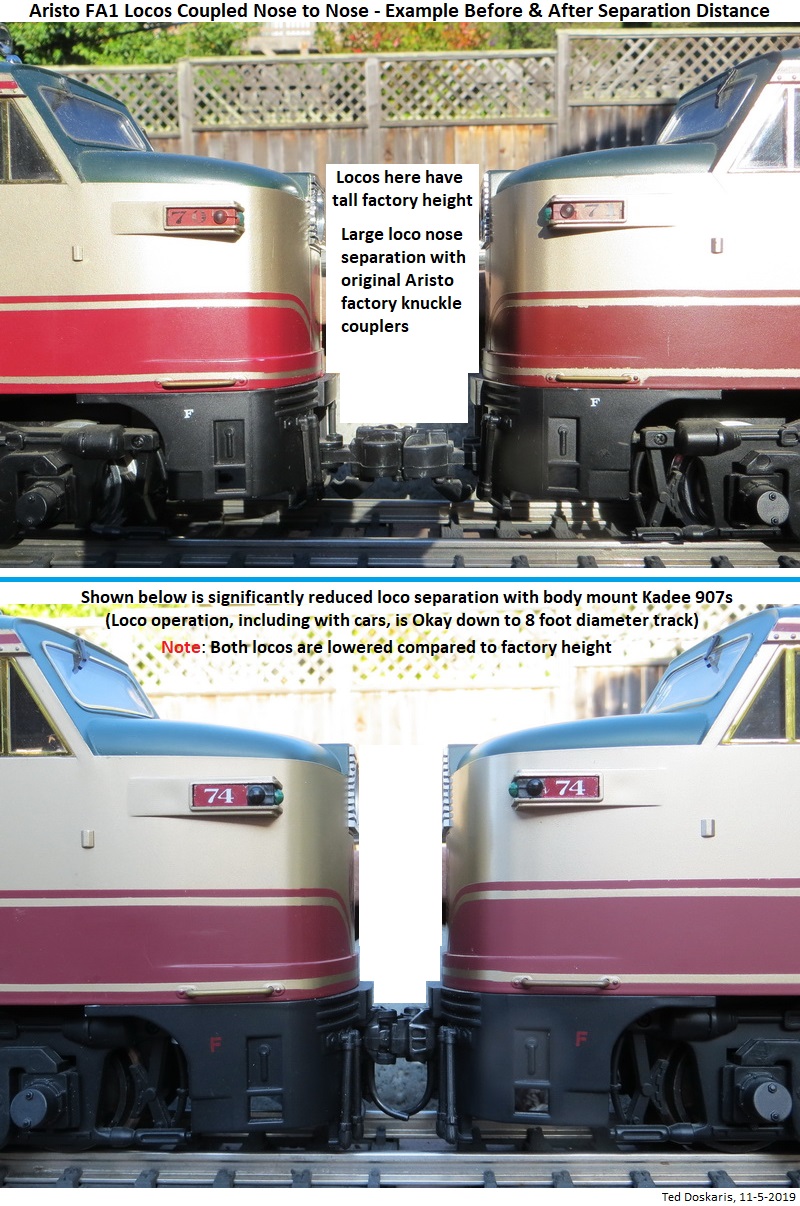 Illustrated below is how the heavyweight cars compare for spacing when changing from factory truck mount couplers to body mount Kadee centerset couplers. 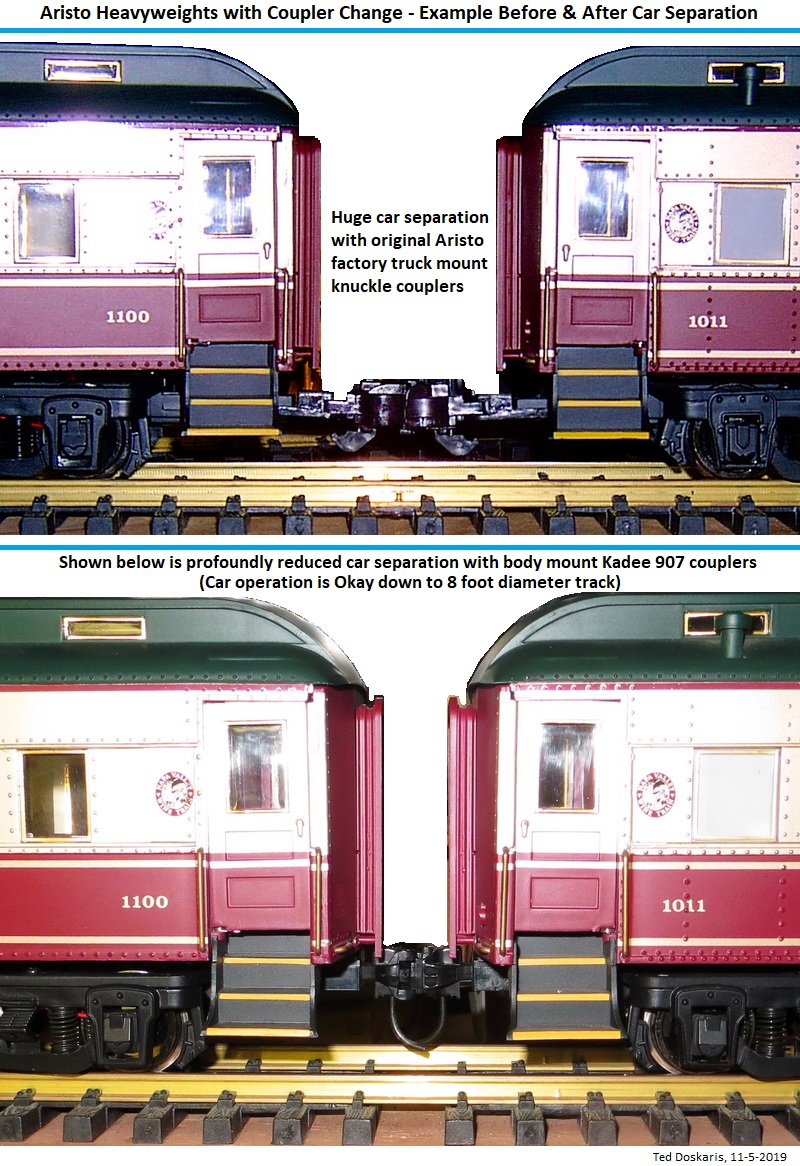 Note about car weight: I did not need to add extra weight to the Napa Valley Wine Train cars that I had done for the heavyweight cars used in my Southern Pacific "Daylight" train. That's because that train has a mix of USA Trains brand streamliner cars which are much heavier, so I had to add about 1 pound to the heavyweight head end cars on that train to avoid string lining.

When operating that original 5 car train with its cars' original 2 axle trucks, one loco (before adding extra weight to it) could not pull the train without incurring wheel slip!
With that experience, I expected even worse pulling ability, however, I was pleasantly surprised after the 3 axle conversion.

When using Aristo's ART-29103 3 axle trucks – a kit which come in pairs inclusive of only one wheel assembly per truck - it is intended that the 2 wheel assemblies be removed from the original 2 axle trucks and transplanted into the 3 axle truck assembly.

Note: Aristo-Craft, now out of business, had redesigned its heavyweight car trucks and corresponding car bolsters from what my particular cars have as described herein. The new design truck styles require corresponding new design car bolsters. Thus, attention should be afforded to what design style trucks one has as well as the design style that is in the ART-29103 3 axle truck kits. Aristo typically did not change the “ART…” identification numbers, so close inspection is well advised.  See Appendix A - Identifying Aristo's Truck Styles.

During the conversion process I discovered that the original 2 axle truck wheels sets did not contain any lubricant which resulted in excessive drag when pulling the Wine Train. When doing the disassembly and re-assembly of the 3 axle trucks I lubricated the axle tips / brass bushing areas, and this resulted in one loco being able to pull all 5 cars – all now with 3 axle trucks!
(After so much to do about the drag of 3 axle trucks vs. the 2 axle trucks in prior Aristo-Craft FORUM threads, this is a revelation.)

When converting the heavyweight cars from 2 to 3 axle trucks, the cars’ underside bolsters must be moved to a new location in a direction closer to the center of the car. This is easy to do as the mounting holes are already provided. However, I had to use a small round file to elongate the bolster screw holes so that once installed, the truck would pivot without rubbing. (The bolster already has elongated holes but not sufficient when mounting in the provided holes of a car’s underside.)

As to the electrical aspect, I just clipped off the 2 axle truck dedicated wires right at their terminal lugs so that the lugs remained with the car body wires when removing the trucks. (Possibly for saving on using additional lugs, Aristo’s factory had soldered both the car body wires and dedicated truck wires to a common lug – one small lug for each electrical polarity meant for the lighting circuits within the car.)
When I installed the new 3 axle trucks, all I had to do was pull the body wires through a hole in the new trucks and then overlay them with the corresponding truck dedicate wire lugs whilst attach with the little screws.
To avoid possible short circuits one must pay attention to electrical polarity when attaching the wires. Be advised that the body red wires are attached to a truck’s dedicated wire corresponding to the same side of the car (likewise for the black body wire - but on the opposite side of the car). Too, I have found that the color code of the truck wires is not always consistently the same from truck to truck! So matching wire connections based on color code without some checking may cause a short.

Compared to the 2 axle trucks, the 3 axle cars now have two additional wheels per car for electrical pickup, therefore, light flickering is virtually eliminated. If one were to further improve on this, it appears the pickup harness with their brass bushing lugs could be transplanted from the old 2 axle trucks to the new 3 axle trucks where there are none. This would NOT add more wheel area for track power pickup, but it would make use of the axles’ shafts for an electrical conduction path to the opposite side brass bushings, and thus add twice the axle to bushing pickup area in the side frames. I did not do this, however.

Since my 3 axle trucks were of the long coupler tang design, the excessive distance between the heavyweight cars when coupled together had been improved upon. Rather than modifying the trucks as to relocating the coupler tang like The Picture shown on George Schreyer's Heavyweight Tips Page, I chose to body mount Kadee 907 centerset couplers.  See vignette, "Aristo Heavyweight Passenger Car & Body Mount Kadee 907s"

Aristo-Craft ART29103 Heavyweight 3 axle truck replacement kit for originally installed 2 axle trucks:
(The kit includes a pair of new trucks but only one wheel assembly per truck as you must swap the wheel assemblies.) 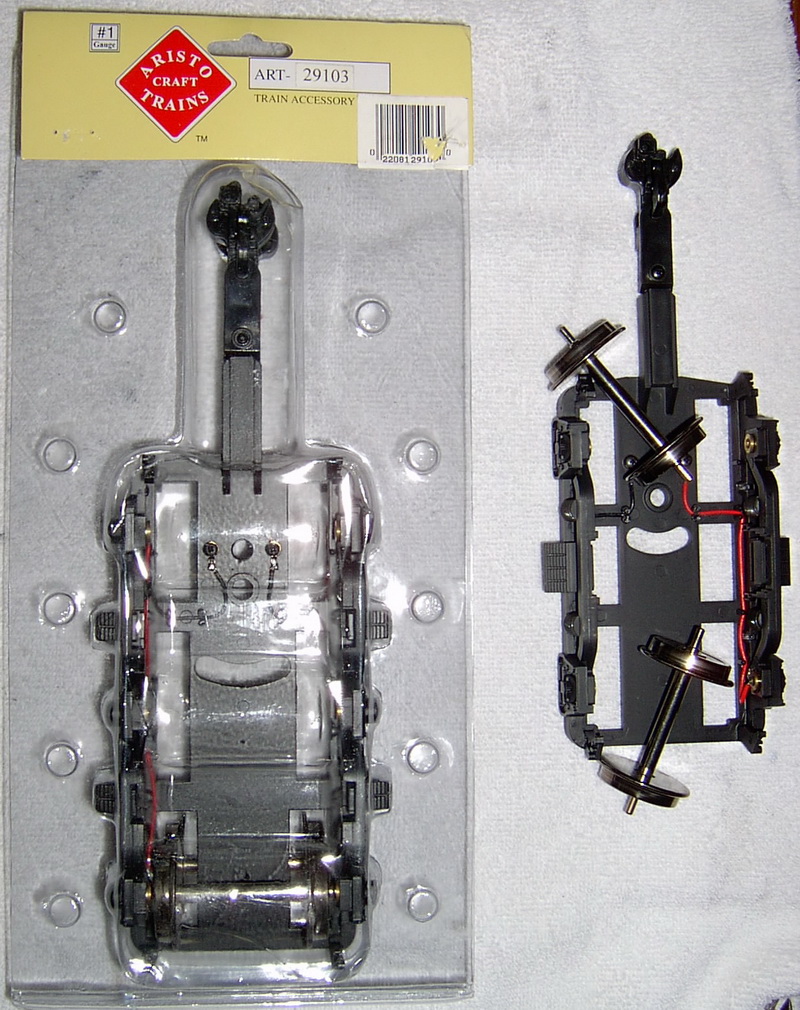 Preparation of side frame removal typically requires use of small flat blade screw driver to pry with whilst using care to not scratch the paint:
(The paint Aristo uses sometimes acts as a glue!) 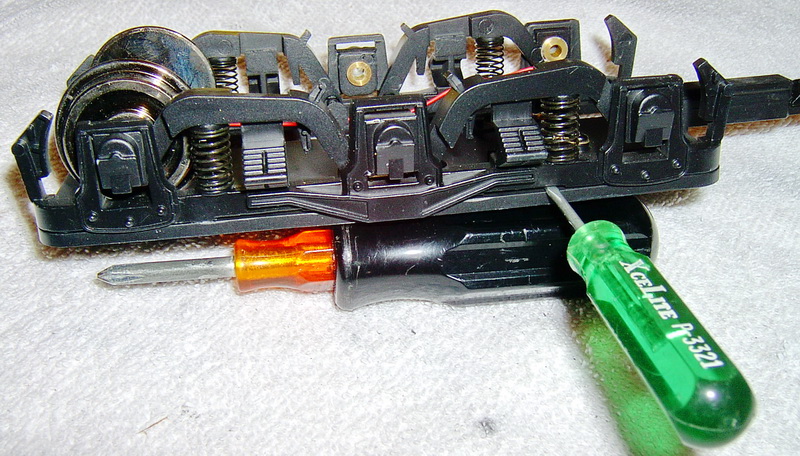 Below is shown the 3 axle truck frame assembly with its wheel assembly axle tips greased and ready to install:
Caution: use of Aristo-Craft’s Electralube grease has been associated with cracked plastic journal boxes that had been discovered after I had greased these trucks. Consequently, I use Molly Paste to lube the heavyweight car axle tips.

Aristo-Craft had since changed to a new nylon type plastic material for its truck parts that is not adversely affected by the Electralube. However, it may be difficult to ascertain which material a given car’s trucks are made of. Visually, the new and old material looks the same, but from my experience, the new nylon material is comparatively somewhat less flexible and somewhat harder than the older plastic material. 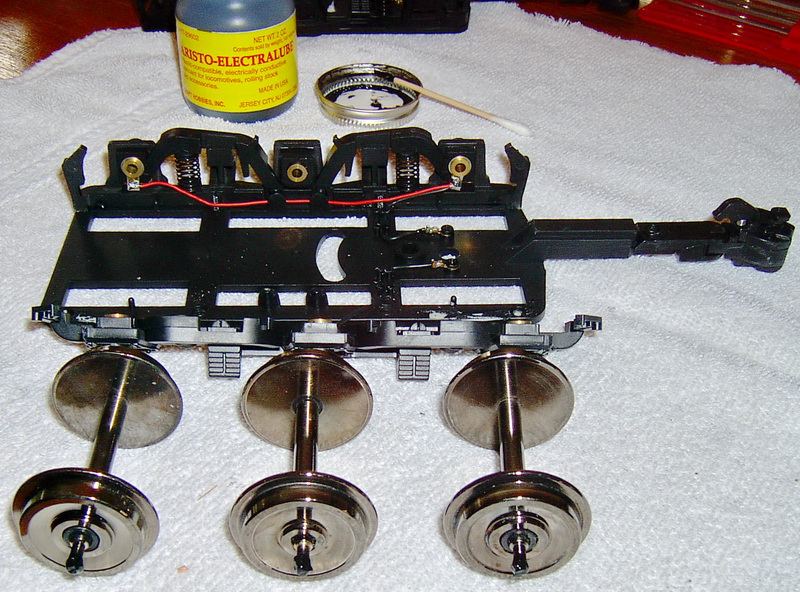 Underside view of car showing original 2 axle truck bolster location. It must be move to the right where the other set of holes are located to accommodate the 3 axle truck installation:
(Note the red and black body wires with terminal lugs which are to be pulled through the new 3 axle truck.) 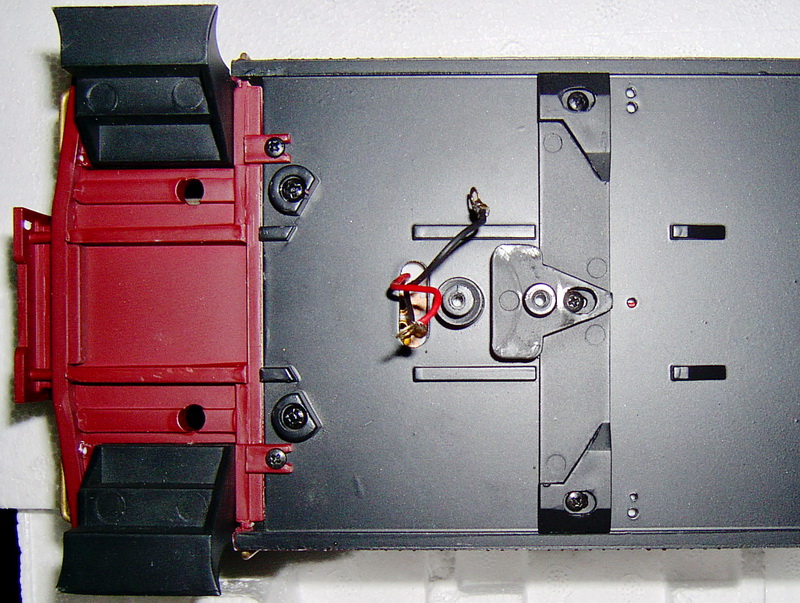 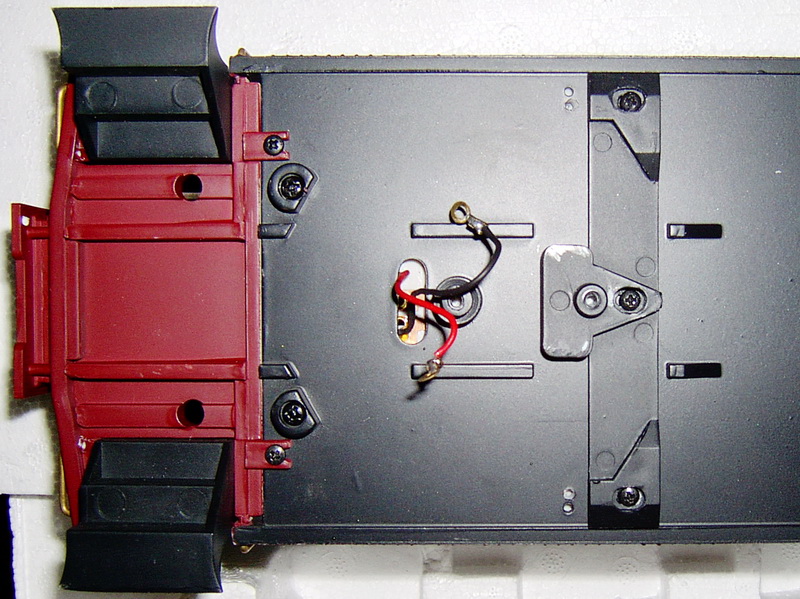 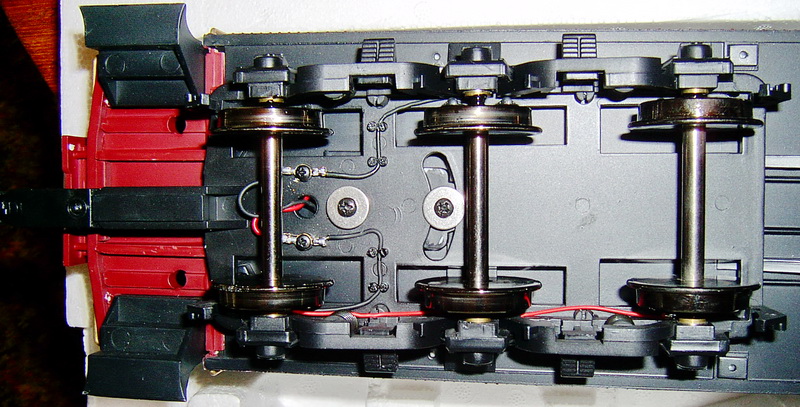 Now shown below is the same heavyweight car with body mount Kadee 907s.
(Note that this upgraded car had its formerly sagging end platform straightened and reinforced to accept the body mount Kadee coupler.)

A comparison of two heavyweight cars, one with the original 2 axle truck and the other on the left side with the newly installed 3 axle truck:

Now shown below is a comparison of the same two heavyweight cars, both with 3 axle trucks and body mount Kadee 907s

The newest type 3 axle truck can be identified as shown below.
(This is the latest 3 axle truck style that includes a fulcrum rib across the top that goes in concert with the late production run heavyweight car bolster design.)

The SP RPO car shown below has the new bolster design. As an experiment I had added the washers for a total of 0.080 inch thickness for just enough light to show between the truck fulcrum rib and the car's bolster to minimize pivot friction and wear. 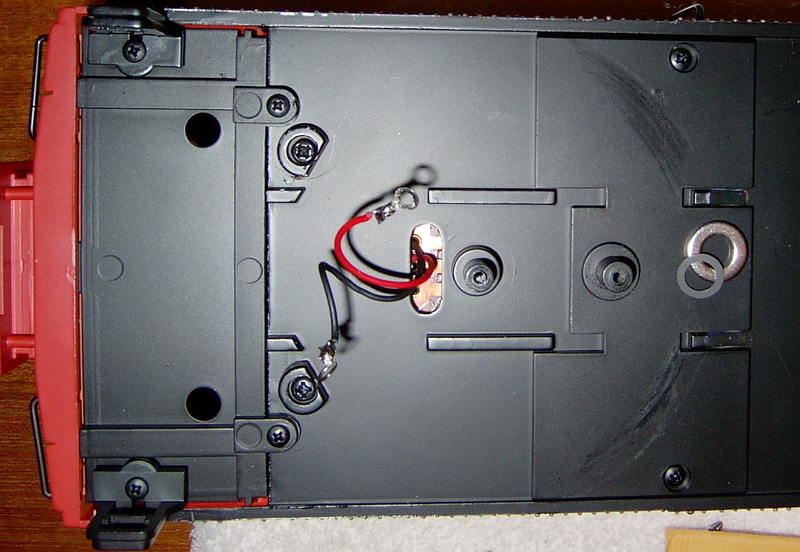 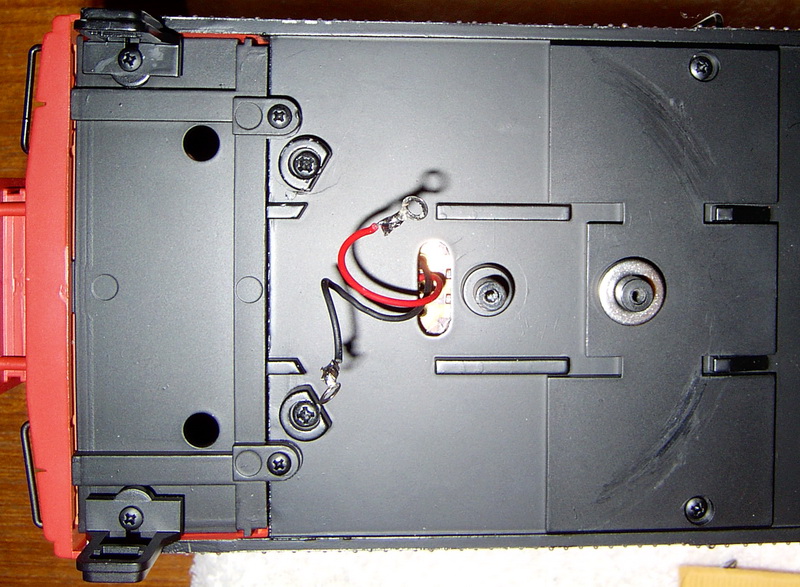 Ultimately, I did not add the washers as shown above because it will disrupt how the truck is intended rock at its fulcrum rib, so I decided to use Lubriplate Lithium grease for friction reduction.

The OLDER design type truck like that on my Napa Valley Wine Train is shown below.
It also has a notably longer coupler tang than the new truck design.
(This is the older design style 3 axle truck without a fulcrum rib across the top that would otherwise be required to go with the late production run heavyweight car bolster design.)

The following picture was previously used, but I think it worthwhile to repeat it here for comparison purposes:
Shown below is the prior design truck bolster.

For historical reference: Below is Aristo-Craft's antecedent REA brand name Heavyweight car 3 axle truck close up showing apparent center mount truck pivot attachment to the car body. This is unlike the Aristo brand name heavyweight car 3 axle trucks that are offset mounted.  These trucks typically had insulated plastic axles between the wheels for independent 6 wheel electrical pickup on each truck.

The train now with 7 cars:

An older video on a windy day when the train had 5 cars: